How YOU can train like the man who climbed Everest TWICE in a week: Scientists reveal the secrets of Kilian Jornet Burgada who scaled the mountain in 17 hours days after his first 26-hour trip to the top

But while most allow two months to reach the summit, scientists have revealed the grueling training regimen of a man who scaled the world’s tallest mountain twice in just one week.

The ultra-marathon champion set another record for speed when he managed the ascent at an astonishing 1,148ft (350m) an hour, all without oxygen or ropes.

But researchers warn the feat is not achievable for most, with Mr Burgada being forced in live in a low-oxygen tent for four weeks and spend 100 hours trekking the Alps in preparation for the challenge.

Scroll down for video

Kilian Jornet Burgada scaled Everest twice in just one week. He is pictured on the trek 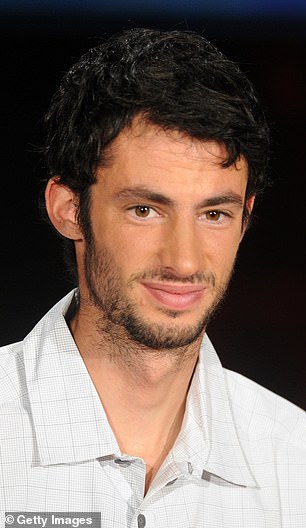 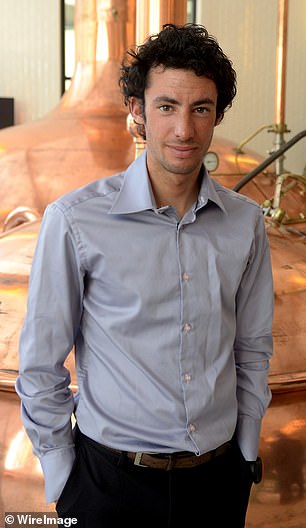 Kilian Jornet Burgada set a world record in May 2017 when he scaled Everest in 26 hours and 31 minutes, only to turn around and do it again. He is pictured left on October 13 2013 on the Italian TV show Che Tempo Che Fa and right at the Sports Cultura Awards 2013 in Barcelona 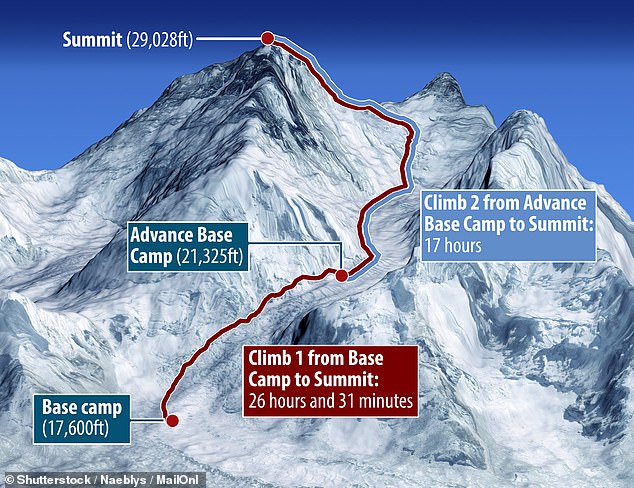 Mr Burgada climbed from Rongbuk Monastery in Tibet to the summit, via Base Camp, at 29,028ft in 26 hours and 31 minutes. A stomach bug forced him to rest for a few days at Advance Base Camp at 21,325ft on his descent. He then climbed to the summit in 17 hours 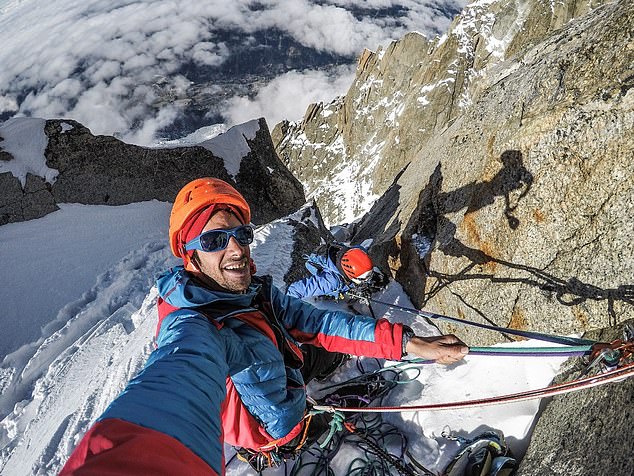 Mr Burgada’s training regimen was led by Dr Gregoire Millet, associate professor in the department of physiology at the University of Lausanne.

The ambitious hiker, who grew up in a hut in the Pyrenees, first had to acclimatise to Everest’s harsh conditions by sleeping in a low-oxygen tent in his now-hometown in Norway.

The tent was pressurised to simulate the atmosphere on the top of Mont Blanc, which stands at around 15,781ft (4,810m) above sea level, The Telegraph reported.

During the day, his tough regimen combined exercising ‘as usual’ with high-intensity treadmill work outs, according to a case report published in the International Journal of Sports Physiology and Performance.

These involved him wearing a mask that delivered oxygen at concentrations equivalent to those found at more than 19,685ft (6,000m) above sea level.

After one month, his ‘pulse saturation’ increased from 70 per cent to 85 per cent.

Pulse saturation measures how much oxygen is in a person’s blood. High levels are required to ensure our muscles, brain and other organs function as they should.

Mr Burgada had a lower than average level at the start, with readings below 90 per cent being considered insufficient, according to the Mayo Clinic.

After this ‘gym training’, Mr Burgada was exposed to ‘real life’ hypoxia when he trained for 100 hours in the Alps. This combined low oxygen with low ambient air pressure.

Ready for the Himalayas, he set off on May 20 from the Rongbuk Monastery in Tibet.

His tough training regimen combined exercising ‘as usual’ with high-intensity work outs. These involved him wearing a mask (pictured) that delivered oxygen at concentrations equivalent to those found at more than 19,685ft (6,000m) above sea level

WHAT DID MR BURGADA TAKE WITH HIM UP EVEREST?

Mr Burgada did not take food on the trek because he prefers to ‘take what nature gives’.

But he did pack a few energy gels and just two litres of water.

Just 26 hours and 31 minutes later, he reached the summit. There is no existing record for an ascent from Base Camp – which is at 17,600ft (5,364m) – to the summit, making this the fastest known time, the British Mountaineering Council reported.

‘This case study reports the preparation for the most outstanding performance ever performed at extreme altitude,’ the researchers wrote.

Mr Burgada planned to climb Everest’s Norton or Hornbein Couloirs, but was forced to take the longer, albeit ‘easier’, Normal Route due to icy conditions.

But the mountaineer still endured 37mph (60kph) winds and developed a stomach bug that forced him to stop every 32ft (10m).

His poor health meant Mr Burgada was too ill to return to Base Camp after the ascent and rested for a few days at Advance Base Camp, or Camp 2, at 21,325ft (6,500m). From there, he ventured to the summit yet again in just 17 hours.

But Mr Burgada failed to beat the record for this route, which was set by Christian Stangl, from Austria, in 2006 at 16 hours and 42 minutes.

Pictured on the trek, he achieved the ‘outstanding performance’ without oxygen or ropes 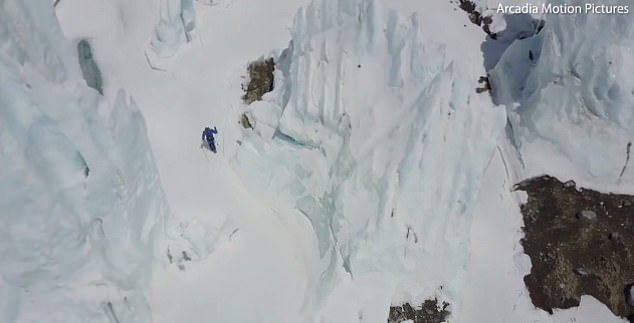 Mr Burgada (pictured on the expedition) planned to climb Everest’s Norton or Hornbein Couloirs, but was forced to take the longer, albeit ‘easier’, Normal Route due to icy conditions 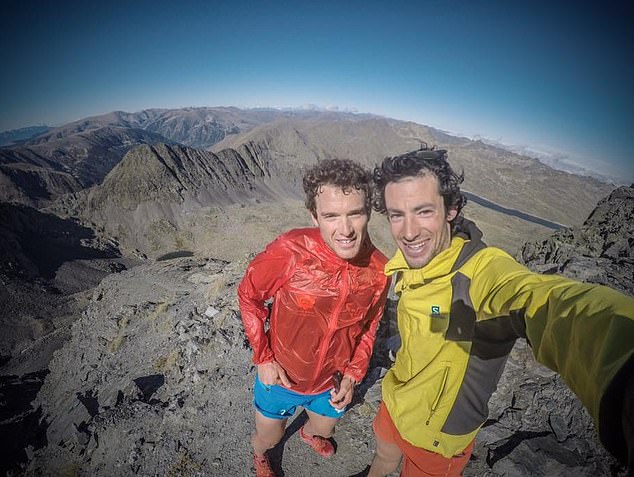 Mr Burgada (pictured right, companion unknown) also holds the record for the fastest known ascent and descent of Denali, Matterhorn and Mont Blanc. He even jogged up Mount Blanc in shorts in five hours, which included him stopping to help a companion who fell into a crevasse

For those wishing to achieve a similar feat, the researchers first recommend you ‘live high, train low and high’ in terms of oxygen exposure.

Ambitious hikers should then endure both low oxygen and low air pressure at increasing altitudes for ‘a better translation of the benefits’.

But the researchers warn the training regimen may not work for those who are less fit than Mr Burgada.

As well as scaling Everest, he holds the record for the fastest known ascent and descent of Denali, in Alaska; and Matterhorn and Mont Blanc, both in the Alps.

He even jogged up Mount Blanc in shorts in just five hours, which included him stopping to help a companion who fell into a crevasse.

Mr Burgada also shuns taking food on his treks, opting instead to ‘take what nature gives’.

Mr Burgada was even held at the Ultra-Trail’s final checkpoint for an hour because no one believed he could have completed the endurance test so quickly, The Times reported. But he still beat the runner-up by 60 minutes.

The researchers released Mr Burgada’s case report to silence critics who argued evidence of his Everest achievement was inconclusive.

Later investigations into Mr Burgada’s GoPro camera confirmed his first ascent but not the second.

He has more recently proven his athletic capabilities by ascending 78,740ft (24,000m) in uphill skiing in just one day, which is the equivalent of 2.7 Everests.

Mr Burgada is now looking to complete ‘short expeditions’ to avoid spending too much time away from home. 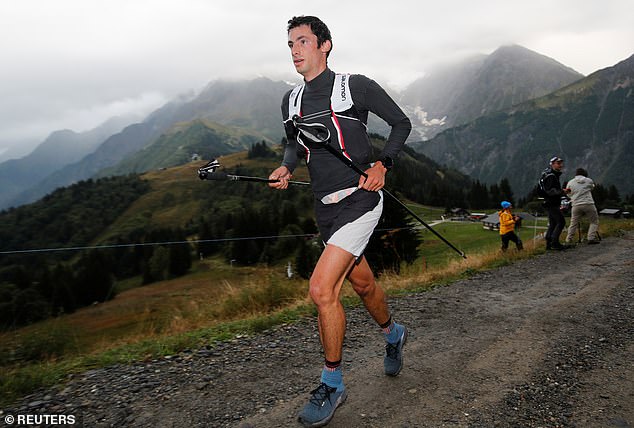 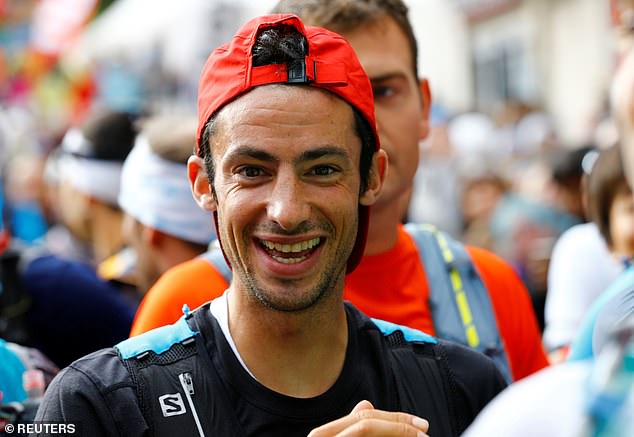 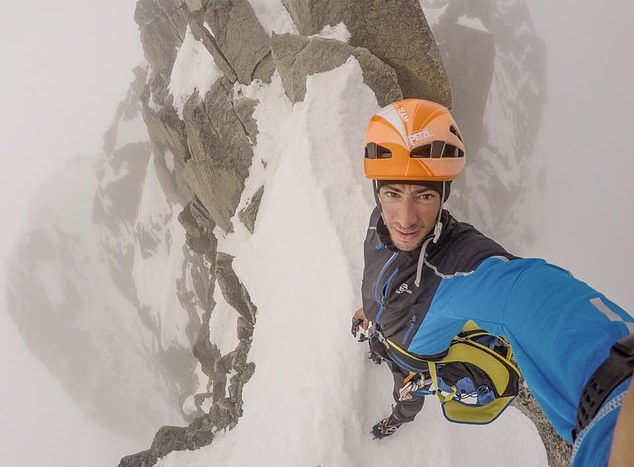 HOW TOUGH IS MOUNT EVEREST TO CLIMB?

Everest is the world’s tallest mountain, and sits along the border of Nepal and Tibet.

Its height is a controversial subject, with different methods of measurements producing altering results.

Sir Edmund Hillary and Tenzing Norgay were the first to reach the summit on May 29 1953 as part of the British expedition led by Lord John Hunt.

On April 18 2014, 16 high-altitude workers were killed in the Khumbu Icefall below Camp 1 when a block of glacial ice collapsed.

These workers often act as guides, and carry tents and other supplies up the mountain for hikers.

Most expeditions take around two months.

‘You will need to progressively ramp up your hike time, distance, and elevation gain (at roughly 10 per cent per week) to safely and effectively build your climbing- specific conditioning,’ it claims.

Those hoping to reach the summit should also complete expeditions above 20,000ft (6,096m) beforehand.

And have experience ‘dealing with equipment’ and ‘handling extremely cold temperatures and extreme altitude’.

Almost all those who climb Everest use a commercial expedition operator.

And each climber has to pay $600 (£460) to the Sagarmatha Pollution Control Committee.

All expedition operators must have helicopter and life insurance.