Home » Health News » How much fiber should you eat? 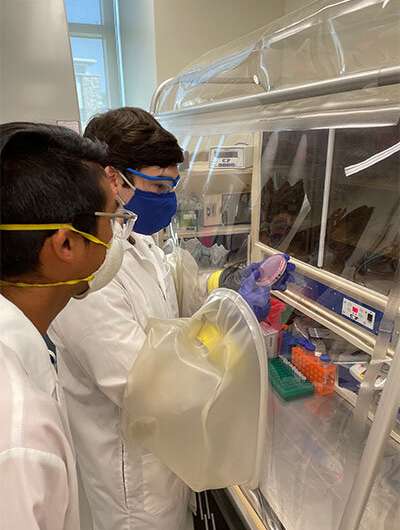 It’s a muggy morning in late August in Durham, N.C.—the temperature has already hit 85 degrees by 9 a.m.—and Jeff Letourneau is headed into the woods. The Ph.D. student in Duke’s Department of Molecular Genetics and Microbiology is out looking for pawpaws—the green, mango-sized fruit with a creamy yellow center. He uses them to make a variety of foods and beverages for his family, including smoothies, custard, and even beer. Often, he just slices them open and eats them plain after being chilled in the refrigerator.

“They have a mango-banana taste,” he says. “They’re delicious.” The largest native fruit in North America, pawpaws can be found growing on trees in wooded areas in central North Carolina during their peak season of late August and early September. Like many wild foods, says Letourneau, most people don’t notice them or realize their nutritional value.

His interest in wild food foraging, which intensified during the pandemic last year, goes far beyond the convenience of free local food. As a budding scientist in the lab of Lawrence David, Ph.D., associate professor of molecular genetics and microbiology, Letourneau studies the effects of a high-fiber diet on human health.

Dietary fiber is the portion of plant-derived food (fruits, vegetables, whole grain products, beans, nuts and seeds) that cannot be completely broken down by digestive enzymes. In humans, a high fiber diet helps promote healthy gastrointestinal function, assists in weight management, and reduces risk of cardiovascular disease and Type 2 diabetes, according to the United States Department of Agriculture (USDA). However, according to a 2016 study, only about 5% of the U.S. population eats the recommended amount of fiber each day, which is a minimum of 14 grams per 1,000 calories.

“The biggest thing you learn in this field is that none of us are eating anywhere near enough fiber,” said Letourneau. He and David, who is a member of the Duke Microbiome Center, have set out to determine how fiber intake impacts the gut microbiome—the trillions of bacteria, fungi, and other microbes that live in the digestive system. They are using a systems-based approach to their research, thinking of the gut microbiome as its own ecosystem and the fiber particle that enters it as a disturbance.

Studying the human gut as an ecosystem

Traditionally, it’s been difficult to study ecosystem disturbances in a controlled way, says David. When a coastal ecosystem is altered by a hurricane, or a forest is damaged by a fire, there are still lots of other factors in the natural environment—people, plants, animals—to consider, making it difficult to study the exact impact of the one disturbance. But in a controlled, closed ecosystem like the human gut microbiome, David and Letourneau can gain insight into how a specific stimulus—such as a food particle—affects the whole system.

To do this, they use two approaches: an artificial model of the human gut as well as stool samples from actual humans who participate in their clinical studies. In the clinical studies, the humans are fed a very strict, prescribed diet that, depending on the study, may serve as a replacement or complement to their regular diet. They must provide a stool sample every day, so the scientists can understand how the gut microbiome has been transformed by the diet.

One of the most fascinating discoveries so far has been that the gut microbiome has an “ecological memory” when it comes to fiber. For one experiment, David and Letourneau created an artificial model of the human gut in the lab that contained human gut-derived bacteria. The scientists “fed” the community of bacteria a sample of fiber to see how they would react.

“At first, the bacteria don’t touch it,” said Letourneau. “They don’t know what to do with it because they haven’t seen it before. But then, a day later, if we hit them with that same type of fiber, they’re able to break it down really fast. Essentially the reaction demonstrates that there is a sort of community-level memory of past fiber exposure.”

The finding, which is in pre-print in bioRxiv—is relevant to human health when it comes to understanding the importance of consistency in nutrition, said Letourneau.

“If you don’t eat much fiber, and then suddenly eat a Fiber One bar, you might not get much out of it nutritionally, because your gut doesn’t recognize it and remember how to break it down,” he said. “But if you’re eating a Fiber One bar every other day, the bacteria in your gut are more likely to remember it and metabolize it efficiently, and you’ll reap the nutritional benefits of the fiber.”

For another more applied project, Letourneau and David received a grant from the U.S. Office of Naval Research (ONR) to test whether a short-term diet of prebiotic inulin—a type of fiber known for its ability to promote growth of beneficial gut microbes—could enhance cognition.

“The ONR’s interest in the project was to identify foods that could improve naval warfighter cognition, say, reaction time for example,” said Letourneau. “However, personally, I was also just interested in the opportunity to examine short-term effects of changes in fiber intake on the microbiome, and more downstream effects such as on cognition.”

To examine cognition, Letourneau recruited volunteer participants from the Duke community, and fed them snack bars infused with inulin. The bars were made by food scientists at the U.S. Army Natick Soldier Research, Development and Engineering Center (NSRDEC). Letourneau worked with the scientists to modify one of their existing recipes, known as the First Strike Bar. While home visiting family, Letourneau even had the opportunity to visit the Massachusetts-based facility and see the bars made in person.

“The whole lab smelled like chocolate,” he said. “I would describe the bars as similar to a brownie flavored Clif Bar, but a little smaller and with puffed rice as a textural element rather than oats. What was most exciting about this whole collaboration is that it gave us the opportunity to have a near-perfect control (the same bar but with digestible carbohydrates in place of the non-digestible inulin fiber), meaning we could even blind participants to which treatment they had received.”

After participants consumed the inulin snack bars, they were given a computerized test to evaluate cognition (the test is literally called “Cognition,” says Letourneau).

“The test was developed by Mathias Basner at the University of Pennsylvania and originally for use with NASA astronauts,” he explained. “This is a really cool test because it tests ten different domains of cognition (reaction time, memory, risk assessment, etc.) and because it was originally designed for high-performing populations (astronauts) which translated well to our study population that largely consisted of Duke students and staff.” Results from the study are still being analyzed.

For Letourneau and David, the quest to understand the health benefits of fiber is just the beginning. A high-fiber diet has already been found to counteract the damaging effects of a number of diseases, including cancer, hypertension, and even Parkinson’s disease, said David.

“The bacteria that latch on to fiber in the gut tend to be the ‘good’ bacteria rather than pathogenic bacteria,” he explained. “When you eat fiber, you’re potentially supporting the growth of bacteria that tend to be more beneficial.”

The list of reasons to eat more fiber just keeps growing, and the scientists hope they can better understand how it is metabolized by gut bacteria in order to provide the average consumer with information to make the best nutritional decisions.

“We know people’s microbiomes are different,” said Letourneau. “Often in an interventional study some people respond better to the fiber than others. But we want to know if we can predict what the optimal type of fiber is for a given person.”

For his thesis, Letourneau is exploring which mechanisms might drive this intra-individual variation, or rather, how day-to-day dietary variation in terms of grams of fiber, types of fiber, and size of food particles, influences the community composition and metabolic functions of an individual’s microbiome.

On a personal level, Letourneau is making sure that he and his family and co-workers get their daily fiber intake. Recently, he brought pawpaws and pawpaw beer to share with the lab. He and his wife take trips to regional food festivals for cooking inspiration and to learn more about what can be found in their own backyard. They plan to attend the Western North Carolina Garlic Festival later this year.

Although he encourages anyone interested to try wild food foraging, Letourneau urges caution and advance planning. Avoid trespassing and know the rules of any public parks before you go, he advises. Most importantly, do not eat any wild plants or mushrooms unless you are 100% sure of its identity, preparation, and how to harvest it responsibly.

Letourneau is currently gearing up to collect maypops and hen-of-the-woods mushrooms, which tend to start appearing in the early Fall.