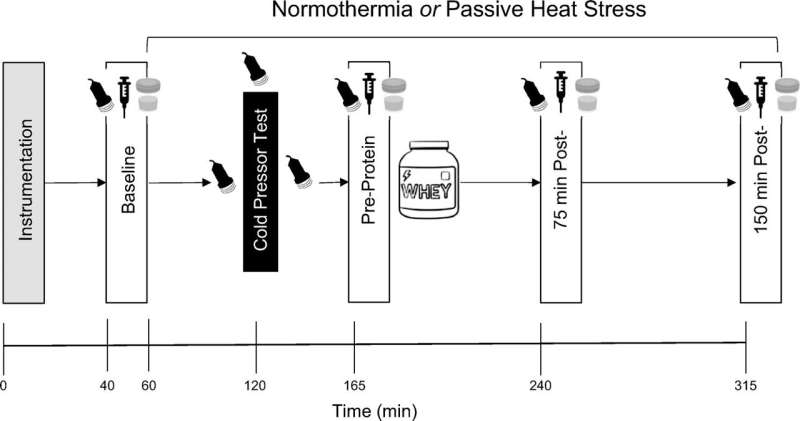 Acute kidney injury—defined as an abrupt decline in glomerular filtration rate (GFR)—is among the top causes of hospitalization during a heat wave. New research published ahead of print in the American Journal of Physiology-Regulatory, Integrative and Comparative Physiology sheds light on how heat stress affects kidney function.

Under normal conditions, the kidneys have a reserve of untapped function they can draw on in the event of greater physiological need. The capacity to increase function is called the GFR reserve. One way to study GFR reserve is to monitor levels of a waste product called creatinine for a few hours after eating a high-protein meal.

For the current study, 16 healthy adults completed two versions of such a trial, one under normal heat conditions and the other under mild heat stress. After collecting baseline readings of kidney function, researchers gave each participant a whey protein shake and monitored them for two and a half hours.

The research team found that creatinine levels were elevated after drinking the shake in the normal temperature trial but not in the heat stress trial. This indicates that the participants’ kidneys were not able to increase their filtration rate to the same degree when faced with mild heat stress as they did at a normal temperature. They likely used their reserve to maintain a reduced degree of function.

This study sheds light on a likely mechanism for the increase in kidney injury during heat waves. The authors note that those known to be at greater risk for kidney damage during heat waves tend to also be populations known to have reduced GFR reserves, such as older adults.