This is the heartwarming moment a Parkinson’s sufferer dances for the first time in ‘years’ following life-changing surgery.

Mike Roll, from West Virginia, had been taking more than eight pills a day to battle vigorous shaking and being barely able to move his body.

But last year the father-of-three was offered deep brain stimulation (DBS) surgery, which saw electrodes inserted into his brain to ease symptoms.

Footage taken after the implant was switched on shows him swinging from side to side, twisting, and laughing with his daughters.

One of his children can be heard exclaiming: ‘Dad! I haven’t seen you move like that in years!’

His third daughter Andrea said: ‘Since his symptoms started getting worse it felt like we lost the old dad. Now, it’s like we have a second chance again and a chance for his granddaughter to know the real him.’

The procedure also allowed Mr Roll to walk his daughter down the aisle, something he could only have dreamed of before the operation. 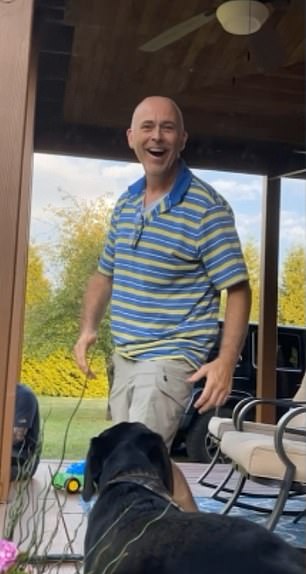 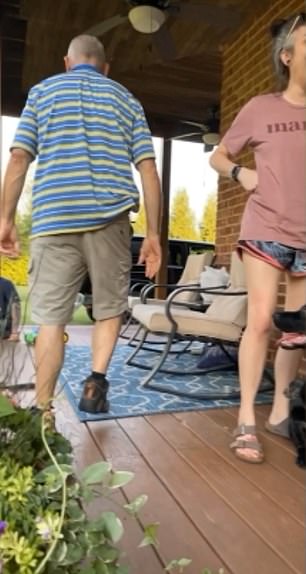 Mike Roll, from West Virginia, was left taking more than eight pills a day to fight Parkinson’s. But after getting surgery he found he was able to walk again and had much better control of his movements (Above, dancing for his daughters) 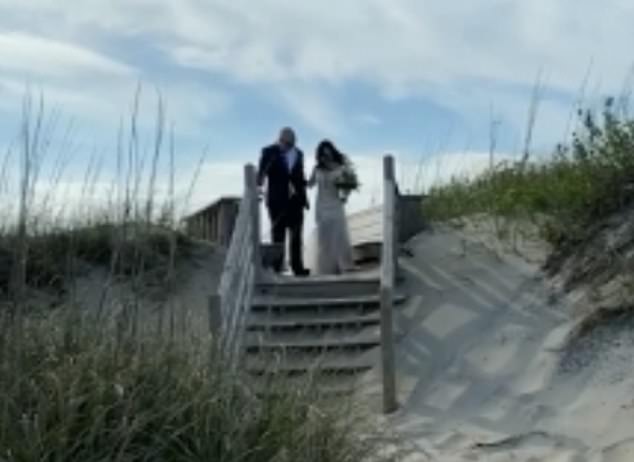 Mr Roll was also able to walk two of his daughters down the aisle thanks to the surgery (pictured). One said it was like they had their father back 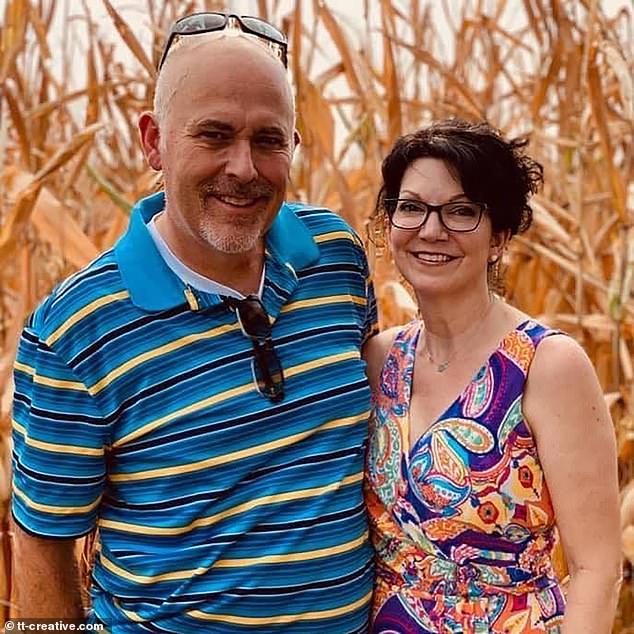 Mr Roll is pictured above with his wife Paula. They have been together for 35 years. He first started suffering symptoms of Parkinson’s almost 16 years ago

Parkinson’s is sparked by a loss of nerve cells involved in dopamine production, a chemical which helps regulate body movement and control mood.

What is deep brain stimulation (DBS) surgery? Can it cure Parkinson’s disease?

When someone is diagnosed with the condition, doctors usually begin treatment with pills.

But should the pills fail to control symptoms they may be offered deep brain stimulation (DBS) surgery.

Parkinson’s UK — which supports people suffering from the condition — says online that this is the most common type of surgery used.

It involves a pulse generator (like a heart pacemaker) being placed under the skin around the stomach or chest.

One or two fine wires are then inserted into specific areas of the brain, and connected to the device.

When it is switched on it sends high frequency waves into the brain, which helps ease the symptoms.

Doctors say this is not a cure for Parkinson’s and will not stop it from progressing.

But the treatment can give people with the condition better control of their movements.

It is not clear what causes this to happen but environmental and genetic factors are thought to be responsible.

Around 145,000 people have Parkinson’s in the UK, with two more diagnosed every hour. In the US nearly a million people are living with the condition.

Mr Roll was diagnosed with the condition in 2014, but first started suffering warning signs of the disease ten years beforehand.

Doctors initially tried to manage his condition with pills, but he deteriorated further and medics instead offered him DBS last August.

It involves surgically implanting a pulse generator — similar to a heart pacemaker — into the chest. Electric wires are then placed under the skin and connected to the brain.

When it is switched on the device delivers high frequency waves to the target areas, stimulating cells and helping to ease symptoms.

Doctors say this does not cure Parkinson’s or stop it from progressing, but in many cases it has given patients better control of their movements.

The procedure is often offered to patients whose symptoms are no longer controlled well by medication.

But it will not be offered in every case because it can make symptoms suffered by some patients — such as loss of balance and speech problems — worse.

Mr Roll said: ‘DBS is not perfect but it is very good, and so much better than taking eight plus pills a day.

‘Being able to do things I have not been able to for the past few years feels amazing to me.’

Following the procedure, Mr Roll was able to walk out of the doctors surgery and dance on the porch of the family home.

In April, he was able to walk his daughter Caitlin down the aisle and, last month, he did the same for his youngest child Hunter.

Mr Roll’s wife Paula said: ‘What an amazing feeling that was seeing him walk her effortlessly.

‘It was so emotional seeing them dance, especially when he could just barely stand with our middle daughter to dance with her at her wedding this year.’

Andrea said: ‘Since his symptoms started getting worse it felt like we lost the old dad.

‘Now, it’s like we have a second chance again and a chance for his granddaughter to know the real him.

‘We were scared about the surgery but are happy to see him happy and back to himself.’ 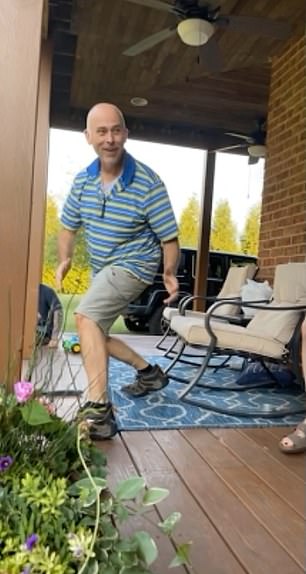 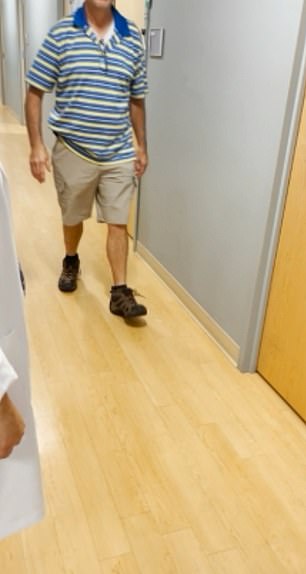 Mr Roll is pictured left doing a twist for his daughers (left) and laughing with them following the surgery. One exclaimed that she hadn’t seen him move like that ‘in years’. On the right he is shown walking in hospital

The three main symptoms of Parkinson’s disease are involuntary shaking of parts of the body, slow movement and stiff or inflexible muscles.

Those who suffer from the condition can also face balance problems, a loss of smell, memory issues, problems sleeping as well as depression and anxiety.

There is currently no cure for the condition.

Dr Beckie Port, a research manager at charity Parkinson’s UK, said: ‘People with Parkinson’s often find that deep brain stimulation works well in controlling many of their symptoms — particularly movement symptoms including tremors. It may also help with some non-movement symptoms like sleep and pain.

‘The process of undergoing deep brain stimulation treatment involves surgically implanting the device and waiting for the body to heal before turning it on.

‘While for some it can take some time to adjust the settings to get optimal control of symptoms, others can see the benefit instantly.

‘When successful, deep brain stimulation can improve quality of life and give back a greater amount of independence to people living with Parkinson’s like Mike.

‘However, it is not a cure.

‘As with all treatments currently available for Parkinson’s, deep brain stimulation will simply help to manage the symptoms of Parkinson’s.

‘It is not suitable for everyone with Parkinson’s; it’s normally only considered when available medications are no longer managing symptoms and there is no guarantee that it will be effective.

‘Everyone being considered for deep brain stimulation needs to go through a careful selection process to see if they are suitable.’

WHAT IS PARKINSON’S DISEASE AND WHAT ARE THE SYMPTOMS?

Broadcaster Jeremy Paxman has revealed he has been diagnosed with Parkinson’s disease, but what are the causes and symptoms, and how is it treated?

What is Parkinson’s disease?

Parkinson’s disease is a neurodegenerative disorder that affects parts of the brain.

What are the symptoms?

The NHS says there are three major symptoms, including tremors or shaking, slowness of movement and muscle stiffness.

Other symptoms include problems with balance, loss of smell, nerve pain, excessive sweating and dizziness.

Some people can also experience lack of sleep, excessive production of saliva and problems swallowing, causing malnutrition and dehydration.

What are the early signs?

Symptoms start gradually, sometimes beginning with a barely noticeable tremor in just one part of the body.

In the early stages, people may show little or no expression, and their arms may not swing when they walk.

Speech can also become soft or slurred, with the condition worsening over time.

What are the causes?

Scientists believe a combination of genetic and environmental factors are the cause of Parkinson’s disease.

It occurs after a person experiences loss of nerve cells in a part of their brain.

However, it is not known why the loss of nerve cells associated with the condition takes place.

Scientists say genetics cause about 10 to 15% of Parkinson’s, and can therefore run in families.

Other factors attributed to causing the condition include environmental problems such as pollution, though such links are inconclusive, the NHS says.

How is it diagnosed?

No tests can conclusively show if a person has the disease, but doctors can make a diagnosis based on symptoms, medical history and a physical examination.

A specialist will ask the person to write or draw, walk or speak to check for any common signs of the condition.

They may even check for difficulty making facial expressions and slowness of limb movement.

How many people are affected?

Around 145,000 people live with Parkinson’s disease in the UK.

What happens if someone is diagnosed?

According to Parkinson’s UK, it is a legal requirement to contact the DVLA, as a diagnosed person will need to have a medical or driving assessment.

The organisation also advises people to contact any insurance providers and find out about financial support available.

People are also encouraged to partake in more exercise.

Can it be treated?

Although there is no cure, a number of treatments are available to help reduce the symptoms.

The three main remedies include medication, exercise and therapy, which can help people in different ways.

What medication is available and what are the side effects?

Medication can be helpful in improving the main symptoms of Parkinson’s disease, such as shaking and movement problems.

There are three main types which are commonly used, levodopa, dopamine agonist or a MAO-B inhibitor.

Each can affect people in different ways.

The drugs do have some side effects, including impulsive and compulsive behaviour, hallucinations, sleep issues and blood pressure changes.

What therapy is available?

There are several therapies available to those with Parkinson’s through the NHS.

Among them are physiotherapy to reduce muscle stiffness, occupational therapy to help with completing day-to-day tasks and speech and language coaching.

Does this change the way you live?

Most people’s life expectancy will not change a great deal, though more advanced symptoms can lead to increased disability and poor health.

It can also cause some cognitive issues and changes to mood and mental health.

Those with Parkinson’s are encouraged to exercise more often, with scientists saying 2.5 hours of exercise a week is enough to slow the progression of symptoms.

Parkinson’s affects one in 500 people and causes muscle stiffness, slowness of movement, tremors, sleep disturbance, chronic fatigue, an impaired quality of life and can lead to severe disability.

It is a progressive neurological condition that destroys cells in the part of the brain that controls movement.

Sufferers are known to have diminished supplies of dopamine because nerve cells that make it have died.

There is currently no cure and no way of stopping the progression of the disease, but hundreds of scientific trials are underway to try and change that.

The disease claimed the life of boxing legend Muhammad Ali in 2016.