How happy is YOUR country? League table reveals Denmark, Finland, Norway, Iceland and Switzerland come out on top – but the UK and US rank mid-table

Denmark, Finland, Norway, Iceland and Switzerland are the happiest countries in the world, according to a league table.

People from the five nations placed themselves at 7.5 out of 10 on a life satisfaction scale for 2017, the most recent set of figures available.

In comparison, the UK scored just 6.7 – despite being slightly more satisfied than the year before, while the US fared slightly better with 6.9.

The figures were revealed in a report by the Office for National Statistics. It delved into the well-being of the UK and how it has improved slightly. 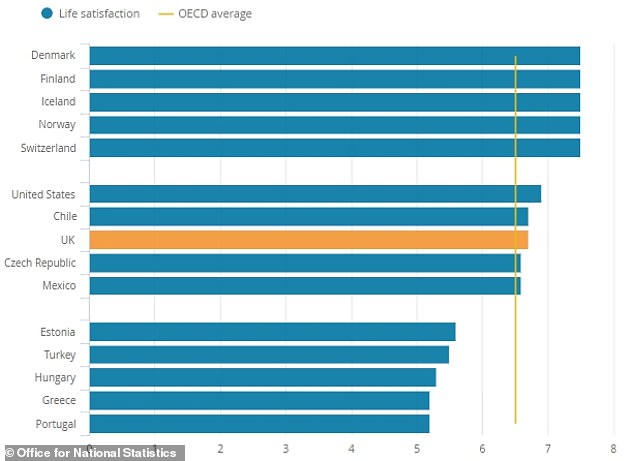 The data comparing European and developed nations also showed mental wellbeing improved by 4.6 per cent between 2011 and 2016 in the UK. However, it remains below the EU average.

There has also been a steep decline in the proportion of people saying their health is good or very good, with a drop of more than 10 per cent since 2010.

However, those in the UK are less likely to say they struggle to make ends meet, with a fifth of people feeling ‘very satisfied’ with their household income.

And the data showed Britons have a lower than average level of trust in the European Union. Statisticians did not speculate as to why.

In a slightly sadder figure, the proportion of people in the UK who felt their life was worthwhile was 86 per cent.

Although this suggests more than one in 10 think the opposite, the figure for 2016 was an increase from 82 per cent in 2011.

IS BRITAIN HAPPIER THAN IT WAS FIVE YEARS AGO?

Score: Average life satisfaction – out of 10

Despite improvements, the UK also has slightly worse mental health than European Union countries on average.

It scored 63.2 per cent on a score made up of questions about how often they felt calm, active, rested, cheerful and interested.

This was a rise from 58.6 per cent in 2011 – a higher score shows better mental wellbeing – but still below the EU average of 64 per cent.

‘This is very encouraging news in a period of deep political and economic uncertainty.

Ireland was the highest scoring for mental health, with 70.5 per cent, whereas Croatia scored lowest with 57.3 per cent.

In 2016, only five per cent of people in the UK said they felt lonely most or all of the time, a drop from seven per cent in 2011.

The UK last year became the only country to have a Government minister for loneliness, with Chatham & Aylesford MP, Tracey Crouch, appointed to the post. 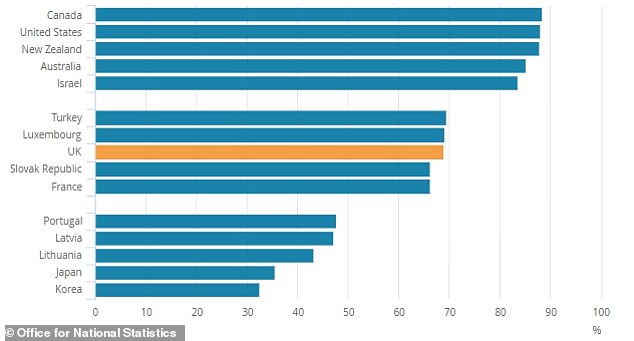 The number of people in the UK saying they are in good or very good health (69 per cent) has been falling since 2010 and is now lower than in Turkey, but higher than France

People in Canada claim to be the healthiest, with 88.4 per cent of them saying they are in good health.

While in Japan, widely regarded as a developed country on par with Europe and North America, only 35.5 per cent of people think their health is good.

Financially, the UK has far fewer people than average saying they struggle to make ends meet – 14 per cent compared to 21.6 per cent in the EU.

And one in five people in 2018 said they were ‘very satisfied’ with their income, a figure also above average for the continent.

As Brexit rumbles on, people in the UK’s relationship with the EU has stagnated – while trust in the organisation has risen on the continent, it remained unchanged in the UK between 2016 and 2018.

Fewer than a third of people say they trust the EU – compared to 42 per cent of people living inside the bloc.