Home » Health News » First national estimates of virginity in Japan: One in 10 adults in their 30s remains a virgin 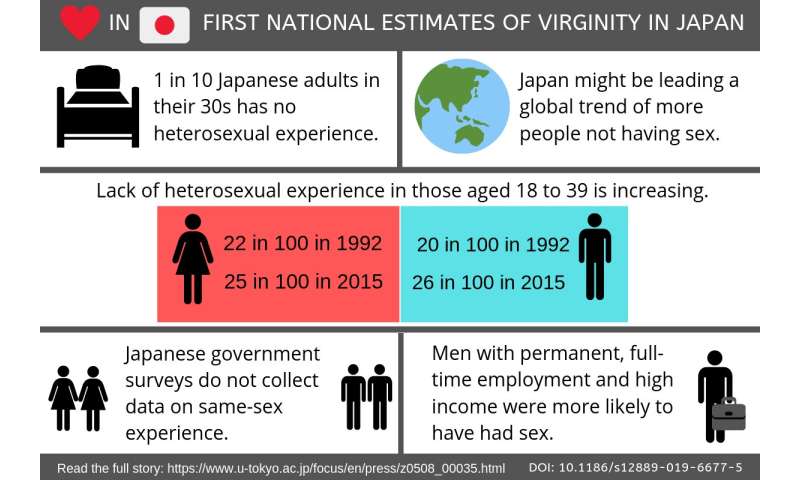 Japan has an increasing percentage of young adults with no history of heterosexual vaginal intercourse. Public health experts at the University of Tokyo have completed the most detailed analysis of national fertility survey data to date to understand trends in sexual experience over the past three decades.

“Previous news reports about virginity rates among Japanese young adults were a bit sensationalist, only included never-married individuals, and did not distinguish virginity rates by age group,” said Dr. Peter Ueda, an expert in epidemiology and public health and leader of the research project.

The new analysis presented estimates for the whole Japanese population, more clearly defined the age and socioeconomic status of people who have never had heterosexual intercourse and compared trends over time. Heterosexual inexperience in women aged 18 to 39 years old increased from 21.7 percent in 1992 to 24.6 percent in 2015. The respective numbers for men were 20 percent and 25.8 percent. When the numbers are broken down to smaller age ranges, the trend towards increased virginity rates is observed even among adults in their 30s.

The data were collected by the National Fertility Survey of Japan, designed and implemented approximately every five years by the Japanese National Institute of Population and Social Security Research. The researchers used data from seven surveys conducted between 1987 and 2015, each including between 11,553 and 17,859 adults aged 18 to 39 years old.

Men were more likely to have had intercourse if they had permanent, full-time employment and lived in cities with more than 1 million inhabitants. Compared to those with the highest incomes, men in the lowest income categories were 10 to 20 times more likely to have no heterosexual experience.

“Although the discussion around cause and effect becomes very complex when considering who becomes sexually experienced and who remains a virgin, we show that heterosexual inexperience is at least partly a socioeconomic issue for men. Simply put, money talks,” said Cyrus Ghaznavi, first author of the study.

Japanese adults are having their first heterosexual experiences later than their counterparts in other countries, and a substantially larger proportion remain inexperienced into their 30s.

In comparable surveys from the U.K., U.S. and Australia, rates of heterosexual inexperience are around 1 to 5 percent in adults in or around their 30s. Survey data from other high-income countries indicate that sexual inactivity among young adults might be increasing, so Japan might be leading the global trend of sexual inactivity.

“Sexual inactivity or inexperience, whether voluntary or not, should not be exoticized, ridiculed, or necessarily considered a concern for everyone. More research is needed on reasons for sexual inactivity and how mating market dynamics might be evolving due to online dating, shifting expectations in romantic and sexual relationships, and changing values, lifestyles, and labor market trends,” said Ueda.

No data on same-sex experience

The survey asks about sexual experience with someone of the opposite sex using a Japanese word that implies vaginal intercourse (seikosho), but it does not explicitly define different types of sex, as is common in similar surveys used in other countries.

The researchers assumed all married adults have had sex. Japan does not yet have marriage equality for same-sex couples. The survey asks no questions about same-sex sexual experience.

When the researchers made estimations to account for people who report no heterosexual intercourse but may have had same-sex intercourse, around 5 percent of people, or one in 20, aged 30 to 39 years old would still lack sexual experience.

Relevant to the national fertility rate and public health implications but not investigated by the survey are people who have had intercourse in the past, but have since become sexually inactive.