Compulsory labelling should be used in the cannabis industry to let users know how much tetrahydrocannabinol (THC) they are smoking, experts say.

Health bosses have called for a unit system similar to the one used for alcohol to be employed in countries where the drug is legal.

They claim it could also inform cannabis users in countries where the drug is illegal. Many have no idea how much THC they are consuming.

THC is the main psychoactive compound in marijuana which gives users a high and can also trigger anxiety in some smokers.

Cannabis use, particularly strains with high THC content, increases your risk of developing a psychotic illness such as schizophrenia.

It is estimated that one in 10 cannabis users are dependent on the drug. Addicts  complain of withdrawal symptoms such as anxiety and insomnia. 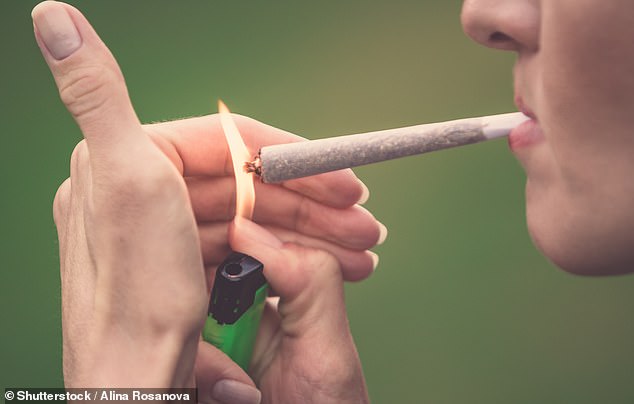 Compulsory labelling should be used in the cannabis industry to let users know how much THC they are smoking, experts say

The group, from the University of Bath, King’s College London, UCL and the Australian Catholic University, suggest a unit level should be set at 5mg of THC.

In Britain, the cannabis smoked by most users has an average THC content of 16 per cent – up from around five per cent just ten years ago. 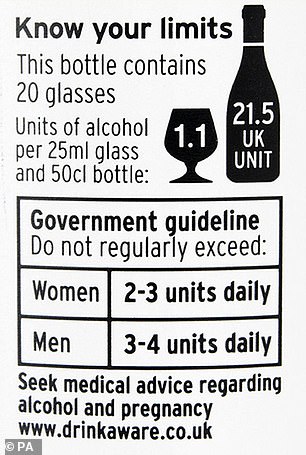 Previous research from the team in 2018 highlighted how concentrations of THC in cannabis have doubled across Europe over the past decade.

Writing in the medical journal Addiction, they say the alcohol units system could be ‘easily’ added to existing packaging labels used in countries where cannabis is legal, such as the US and Canada.

They hope this could then provide a practical guideline for consumers and doctors in nations where cannabis is illegal.

Dr Tom Freeman, from the Addiction and Mental Health Group at the University of Bath, said: ‘Our findings highlight the need to develop an evidence-based framework to help people use cannabis more safely.

‘The current lack of information increases the risk of harm to the consumer. Of course the safest level of use for cannabis is “no use”.

‘Yet, we know that many people across the world regularly consume cannabis so we need to consider how we can better support them in making informed choices and to minimise potential health risks such as addiction or psychosis.

‘Where the unit system for alcohol has helped consumers to better manage their alcohol intake, so too do we think this could have important implications for cannabis users.

THE DIFFERENCES BETWEEN THC AND CBD

Tetrahydrocannabinol (THC) and cannabidiol (CBD) are both derived from the cannabis plant.

Together, they are part of the cannabinoid group of compounds found in hashish, hash oil, and most strains of marijuana.

THC is the psychoactive compound responsible for the euphoric, ‘high’ feeling often associated with marijuana.

THC interacts with CB1 receptors in the central nervous system and brain and creates the sensations of euphoria and anxiety.

CBD does not fit these receptors well, and actually decreases the effects of THC, and is not psychoactive.

CBD is thought to help reduce anxiety and inflammation.

‘Our hope is that the introduction of a system in locations where it is legalised will have knock-on effects to countries where it is not, providing both users and clinicians an important toolkit to guide safer use.’

The research coincides with a second study from the team, published in the journal Psychological Medicine.

In this work, the researchers examined the relationship between using various cannabis products and key health outcomes in more than 55,000 people across 175 countries.

Consumers were asked about the type of cannabis products they used, as well as the severity of problems relating to cannabis use including on their mental health.

Sam Craft, from King’s College London, said: ‘Our findings add to a growing body of evidence that suggests the health effects of cannabis are dose-related.

‘These risks though might be modifiable and we believe that the introduction of a unit system would help both users and healthcare professionals by providing clearer information on the types of cannabis products they consume and their strength.’

WHAT EVIDENCE IS THERE THAT CANNABIS INCREASES RISK OF MENTAL HEALTH ILLNESS?