Not only does this suggest that trans women should keep up hormone therapy post-op, it also underscores the deep connection between hormones and brain connectivity.

After having bottom surgery, removing the testicles, trans women experience the same symptoms that post-menopausal women do, such as hot flashes and night sweats.

The discovery, made by scientists at McMaster University in Ontario, Canada, and at the Hospital de Clínicas de Porto Alegre in Brazil, suggests that estrogen therapy may benefit the brains of trans women and post-menopausal women alike. 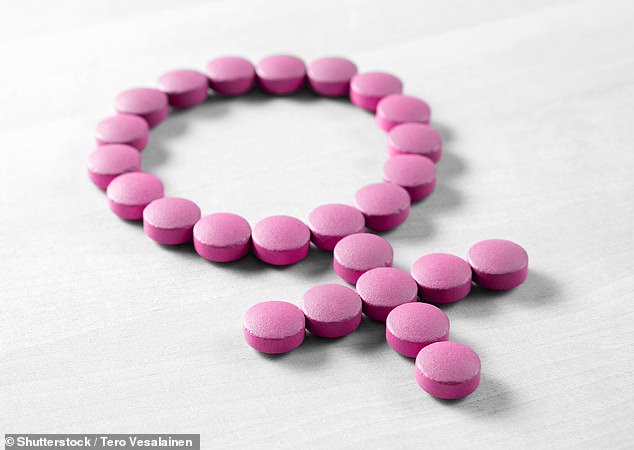 Taking estrogen improves connections between the part of the brain that sorts sensory information and those responsible for emotions, memory, motor skills and more

As research advances, we are discovering more and more how central hormones are to many physical processes – and how interconnected these systems are.

The hormone or endocrine system plays a key role in instigating everything from how we process food to how stress effects the body and even our heartbeats.

And the new research sheds light on how sex hormones affect the brain, too.

For trans women, gender-affirming surgery can do wonders to dispel lifelong dysphoria, in turn improving mental health and overall quality of life.

As the trans community and trans issues are finally becoming more socially accepted, doctors have seen a swell in the number of people seeking and having gender-affirming operations.

In the case of trans women, a complete transition means removing the testicles and penis – and with them the production center for male hormones.

Prior to surgery, many trans women take estrogen – in addition to testosterone blockers and progesterones, in many cases – to encourage their transition.

These hormones have a four-part effect on trans women’s bodies and minds.

There are two categories of fairly clear but poorly understood effects of hormone therapy’s effects on the brain: the quick change in how women perceive sensory information and in the emotional changes that some trans women experience.

But the new study reveals one of the mechanisms that may be at play – namely, communication between brain regions through the thalamus.

The researchers recruited 18 transgender women who had undergone complete transition surgeries, including the removal of testicles, stopping their male hormone production.

They all went off the estrogen therapies they’d taken before surgery for a month, were given MRIs to asses their brain activity, then resumed estrogen.

After another two months (60 days), they underwent another MRI.

The researchers saw that, while the women were on estrogen, a region of the brain called the thalamus was much more active.

The thalamus is the reception center and interpreter for sensory information, sorting it into categories – audio, visual, tactile, taste-related – and sending it to the appropriate portions of the brain for processing.

Sitting just beneath the thalamus, the hypothalamus is considered the link and mediator between the endocrine, or hormonal system, and the central nervous system (including the brain).

But more recent research suggests an even more complex relationship between hormones – estrogen in particular – and the brain.

Namely, as the Canadian and Brazilian research team reports, higher estrogen levels encourage connection and communication between the thalamus and brain regions the dictate our fine motor skills, learning, emotions and sensory perception.

This may explain the common reports of things ‘feeling different.’

‘We found taking estradiol’ – an estrogen replacement – ‘strengthened the thalamus’ role as a ‘relay station’ for sensory and motor information in the brain,’ the study authors said.

Their findings also support the recommendation that, even after completing surgical transition, trans women continue to take estrogen.

‘Our study suggests they should continue taking estradiol not only to feminize their bodies or to avoid the symptoms related to the absence of sex hormones, but also to prevent the weakening of brain connectivity between brain regions of clinical relevance,’ said study study co-author Dr Tayane Muniz Fighera, of the Hospital de Clínicas de Porto Alegre in Porto Alegre, Brazil.

Since post-menopausal women have the same symptoms and challenges when their bodies stop producing estrogen, this work suggests that hormone therapy may help protect them against the cognitive symptoms of menopause, like brain fog, too.