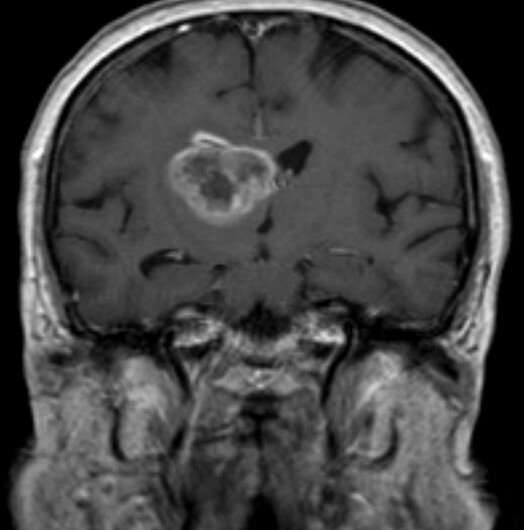 Based on the findings of a new study led by the Translational Genomics Research Institute (TGen), part of City of Hope, a coast-to-coast clinical trial is planned that, if successful, could lead to FDA approval of the first new drug treatment in more than a decade for glioblastoma, the most common and aggressive type of brain cancer.

Using precision medicine to select only participants with a specific genomic “signature of vulnerability,” researchers expect the new treatment could help up to a third of all glioblastoma patients. An estimated 18,000 Americans are expected to die this year from brain cancer, the nation’s seventh leading cause of cancer death.

Results of a preclinical study published in Neuro-Oncology suggest that a drug combination of MLN4924, also known as Pevonedistat, when given in combination with a second drug called Etoposide, could help glioblastoma patients whose cancer cells have lost PTEN, a tumor-suppressor gene.

Genomic sequencing of patient-derived tissue samples showed those samples with a loss of PTEN also showed a spike in the expression of a gene called TOP2A, which research suggests resists the effectiveness of MLN4924. By using Etoposide to block TOP2A, researchers believe glioma cells will be weakened enough for MLN4924 to kill the cancer.

“I’m greatly encouraged,” said Michael Berens, Ph.D., head of TGen’s Glioma Research Lab, and one of the study’s senior authors. “There hasn’t been a new drug approved for glioblastoma in 13 years. Knowing the right patients to enroll in the clinical trial, through study of molecular features of sensitive and resistant tumors, and only treating patients whose tumors have the signature of vulnerability, should set us on a path to a new approved drug treatment.”

Drug combination 10 years in the making

The identification of MLN4924/Pevonedistat grew out of a high-throughput screen nearly a decade ago of more than 100,000 different drugs, trying to find an effective molecule that also was small enough to pass through the protective web of extra-small capillaries that surrounds the brain, forming what is known as the blood-brain barrier.

From those initial screenings, researchers identified four drugs—Arsenic Trioxide, Methoxyamine, Selinexor and MLN4924/Pevonedistat. The first three drugs have already undergone clinical trials for glioblastoma patients, but were considered failures because they didn’t substantially extend the survival of a sufficient number of patients. However, Dr. Berens noted that they did work for a small percentage of patients with particular genomic profiles. Pevonedistat, which was originally developed for another disease, has never been tested in patients with glioblastoma.

Dr. Berens and his team are planning a series of clinical trials at sites across the nation that will test the safety and effectiveness of MLN4924/Pevonedistat with Etoposide. That drug combination, along with at least three others, will be tested in the Glioblastoma Umbrella Signature Trial (GUST). An abstract of the project was presented April 13 at the annual meeting of the American Association for Cancer Research (AACR) in New Orleans.

“Our use of multiple vulnerability signatures in the GUST trial will demonstrate how a precision-medicine model can support an efficient clinical trial for diseases, such as glioblastoma, that are characterized by multiple mutations that result in multiple tumor types,” said Associate Professor Patrick Pirrotte, Ph.D., Director of TGen’s Collaborative Center for Translational Mass Spectrometry, and one of the study’s authors.