DR MAX THE MIND DOCTOR: Why sunshine can make you SAD… and I should know because I’m one of the sufferers

This week has been a bit of a nightmare for me. You see sunny weather makes me miserable — but it’s not just the heat that is to blame.

I dread the endless hours of daylight, feel uncomfortable sitting out in the sunshine, avoid trips to the beach and cannot stand picnics, barbecues and all the other so-called joys of summer.

Given the choice, I’d opt for an overcast day with the prospect of light drizzle every time. 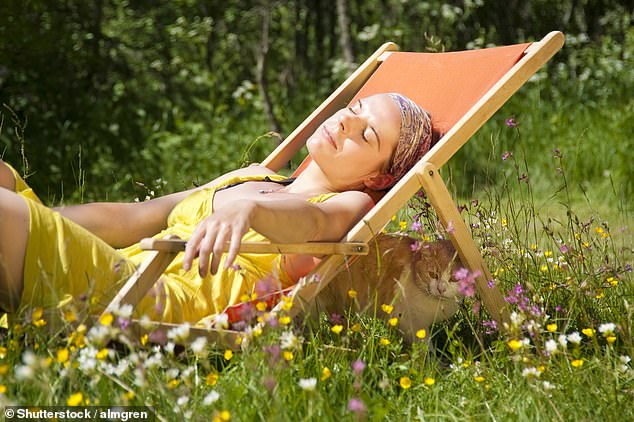 Scientists aren’t entirely sure what triggers the summer-blues. However, animal studies have found that variations in a region of the mid-brain called the dorsal raphe nucleus can affect mood in relation to exposure to sunlight [File photo]

In fact, during last year’s prolonged heatwave, I booked a week of annual leave just so I could stay in my flat with the blinds closed, and I didn’t venture out until after dark.

So I’ve never understood those among my fellow Brits who long for scorching weather and who, if they can’t get it here, flee abroad. But dare to say this out loud and most people stare at you in utter bewilderment: am I mad?

I’m not mad and I’m not alone. In fact, some people’s negative response to sunshine is so marked that it is now being recognised as a medical condition.

Just as a lack of sunlight in the winter months can trigger seasonal affective disorder (SAD), evidence is emerging that long hours of daylight and heat during summer can also wreak havoc with people’s body clocks. This has been dubbed ‘reverse-SAD’ or ‘summer-SAD’ and it leads to a dip in mood and even depression. 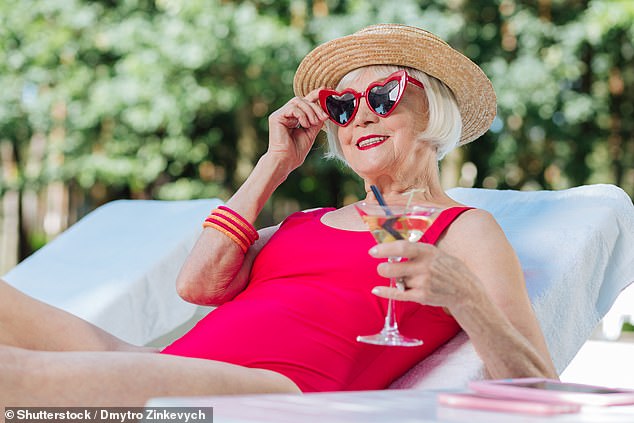 I dread the endless hours of daylight, feel uncomfortable sitting out in the sunshine, avoid trips to the beach and cannot stand picnics, barbecues and all the other so-called joys of summer [File photo]

But while the symptoms of winter-SAD are sluggishness, feeling tired all the time and a tendency to over-eat and gain weight, those of summer-SAD are the opposite: insomnia, loss of appetite and feelings of agitation or anxiety.

It’s estimated that one in ten people with SAD suffer from the summer variant. This certainly chimes with me and some of my friends who have confided that they, too, often feel inexplicably down during the summer months.

A friend texted me last week saying: ‘I keep wanting to cry. I’m trying to keep my negative feelings to myself, but I just don’t understand why people enjoy this sunny weather.’ She added that she hadn’t left her house for three days.

The symptoms of summer-SAD are thought to be exacerbated because we are expected to be happier during the warmer, lighter months. That makes those who are adversely affected feel even more isolated, compounding their low mood.

Scientists aren’t entirely sure what triggers the summer-blues. However, animal studies have found that variations in a region of the mid-brain called the dorsal raphe nucleus can affect mood in relation to exposure to sunlight. 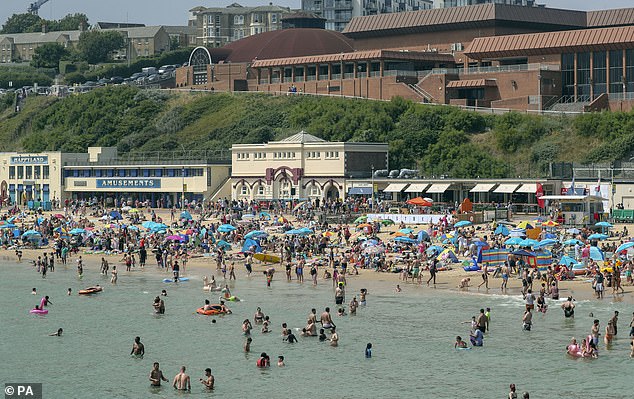 It’s estimated that one in ten people with SAD suffer from the summer variant. This certainly chimes with me and some of my friends who have confided that they, too, often feel inexplicably down during the summer months. People are pictured on Bournemouth beach this week

Other research suggests that summer-SAD may be down to changes in melatonin, the hormone in the brain that helps to regulate sleep-wake cycles.

In some people, it is possible that excess light can result in the brain not making enough melatonin, causing insomnia and jet-lag type symptoms.

And just as not being able to sleep can make you feel down, lack of melatonin can also affect your mood. When your body doesn’t produce enough, it can trigger a depressive illness or anxiety.

There’s no clear treatment for summer-SAD yet. While winter-SAD is often treated with a light box to stimulate melatonin, that obviously won’t work here because the problems are caused by too much light.

It’s been suggested that a new antidepressant, agomelatine, which acts on the melatonin receptors in the brain, might help sufferers and it’s certainly been shown to help regulate sleep. What we need are clinical studies to see if it helps with summer-SAD.

For those of us who are affected, however, let’s take some comfort in the fact that summer will soon be over and we can look forward to shorter days, colder weather — and Christmas!

An appalling gap in children’s care

A damning investigation has found that young children with mental health problems are having to travel hundreds of miles for treatment.

Data obtained by the Press Association under the Freedom of Information Act shows that 1,249 children were admitted to facilities up to 339 miles away from home in 2017/18 because of a lack of beds locally.

This is appalling because it can have a serious impact on the quality of their treatment and slow their recovery. 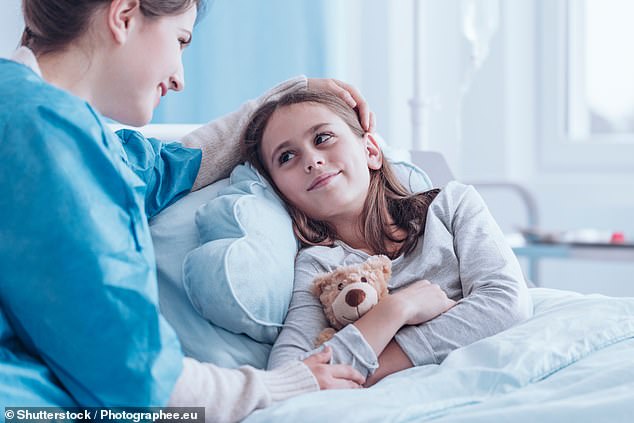 Distance also makes it harder for a child to integrate back into their family after treatment. This should happen gradually, with the child spending a few hours at home to start with, slowly building up to overnight stays [File photo]

The solution to children’s mental health problems often lies in helping the entire family, which is why family therapy is an integral part of care.

When a child is an inpatient, they need their families just as much, if not more. But if they are hours away from home, it makes visiting difficult and also compromises treatment.

The staff can’t conduct a full and thorough assessment of what is happening at home and the child won’t get the maximum benefit from the therapy on offer.

Distance also makes it harder for a child to integrate back into their family after treatment. This should happen gradually, with the child spending a few hours at home to start with, slowly building up to overnight stays.

The NHS urgently needs to review the situation. Smaller, more local units are the answer. We owe it to children to ensure they get the best care.

The cut that can ruin a man’s life

This week, a BBC1 documentary, A Cut Too Far?, gave an insight into the contentious issue of male circumcision. But I was disappointed its conclusion was only a call for greater regulation.

I have seen many men in psychiatric outpatient clinics who tell me that their lives have been ruined by circumcision.

Cases of mutilation are rare (although it does happen, as the documentary made clear), but in my experience incidences of significantly decreased sensitivity are relatively common.

This can have a lifelong and irreversible impact on men’s lives and relationships. Yet it’s rarely talked about.

Many people have no idea about the negative effects of this procedure and, because of religious and cultural sensitivities (several belief systems, including Judaism, Islam and some branches of Christianity, advocate male circumcision as a religious rite), we are often too scared to challenge it.

Would a BBC documentary have dared come to a fence-sitting conclusion about female genital mutilation? I don’t think so.

Male circumcision involves the removal of healthy tissues, just as in FGM. It’s no more justifiable doing it to males as it is to females. Of course, there are medical reasons when it might be necessary.

But most male circumcisions are done for cultural or religious reasons or because it’s thought to be hygienic — interestingly, the same justifications used for FGM.

Circumcision can be a painful and potentially damaging operation. Why is it acceptable to surgically alter the genitalia of boys, but not girls?

I was overwhelmed by the response to last week’s column about the stress my nan suffered when she was diagnosed with dementia and thought she would have to sell her home to pay for care.

You told me heart-breaking stories about loved ones forced to sell up, who often found themselves paying far higher fees than council-funded patients — while elderly people with other medical problems get free care.

So I’m delighted Boris Johnson is backing the Mail’s campaign to solve our social care problem and I look forward to seeing him put his words into action.

The British Association of Aesthetic Plastic Surgeons warned this week of the potential physical health complications of breast enlargements.

Yes, patients should know about these dangers, but they should be warned about the mental health aspects, too. Research shows that women who undergo breast augmentation initially report improvements to their mood, self-esteem and body image.

But these benefits are short-lived. The women soon realise that having larger breasts doesn’t improve their lives in any meaningful way.

Instead, they often start fixating on other parts of their body and their self-esteem plummets again. The answer is therapy to address their feelings of inadequacy, not the surgeon’s knife. 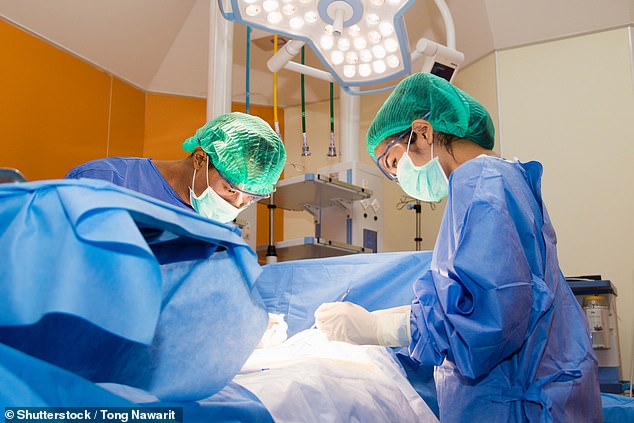 It can be difficult to find clear, unbiased and accurate health information on the internet.

So when patients ask me for advice about where to read up about conditions and treatments, I always recommend patient.info.

Written and reviewed by experts — many of whom are leading doctors in their field — all the clinical information has been certified to meet NHS England’s information standard. It’s lucid, straightforward and, most importantly, trustworthy.