Does glandular fever lead to schizophrenia? Study reveals a link between the common virus and the mental disorder

Having glandular fever as a teenager could increase your risk of schizophrenia in later life, a study has revealed.

The common virus, spread by kissing, was linked to the mental disorder by researchers at Johns Hopkins University, Baltimore.

People with schizophrenia were more than twice as likely to have increased levels of glandular fever-type antibodies, the research found.

The scientists behind the findings said it could pave the way for prevention of serious psychiatric disorders. 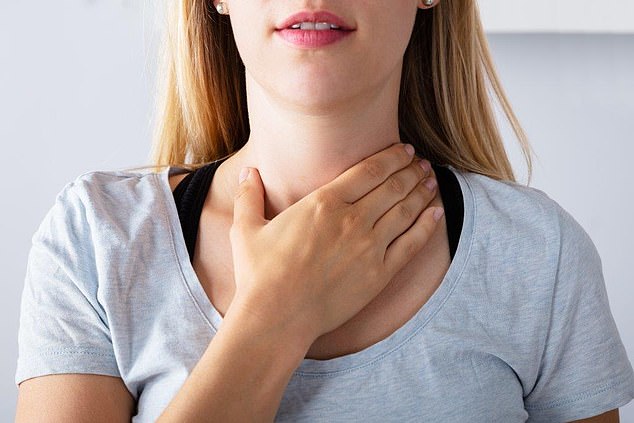 Glandular fever could increase the risk of schizophrenia, a study has revealed

However, the virus, known in the US as mono, cannot be treated and can only be controlled through good hygiene.

It is caused by EBV, or Epstein-Barr virus, which infects more than 90 per cent of people worldwide, according to Cancer Research UK.

In most people with the Epstein-Barr virus, it lies dormant in their body, unless it is active, which is when it causes glandular fever.

Schizophrenia affects more than 21million people worldwide, according to the World Health Organization.

The researchers are unsure of the cause and effect, therefore it is possible that the link between the two could be the other way round.

‘We are interested in the role of infectious agents such as Epstein-Barr virus in schizophrenia,’ said lead author Professor Robert Yolken.

The study looked at 743 people – 432 with a schizophrenia diagnosis and 311 without a history of a psychiatric disorder to serve as a control group.

The researchers first measured the levels of EBV antibodies in both groups for the study, published in Schizophrenia Bulletin.

They found people with schizophrenia were 1.7 to 2.3 times more likely to have increased levels of some EBV antibodies than people in the control group.

WHAT ARE THE SYMPTOMS OF GLANDULAR FEVER?

Glandular fever mostly affects teenagers and young adults. It gets better without treatment, but it can make you feel very ill and last for weeks.

More serious symptoms, which may require emergency are:

You should feel better within two to three weeks. Some people might feel extremely tired for months.

Glandular fever can cause your spleen to swell. For the first month, avoid sports or activities that might increase your risk of falling, as this may damage your spleen.

You don’t usually get glandular fever more than once.

Then, the researchers sequenced a portion of the participants’ DNA to determine their genetic risk for schizophrenia.

Results from the analysis showed people who had an increased genetic risk for schizophrenia and increased antibody levels to EBV had a more than eight times higher chance of being schizophrenic compared to mentally healthy.

Antibodies related to other viruses, such as chickenpox or the cold sore virus, were not increased in people with schizophrenia.

‘We found that individuals with schizophrenia had an unusual response to Epstein-Barr virus,’ said Professor Yolken.

There are no treatments available for EBV approved by the Food and Drug Administration in the US and the NHS in the UK.

According to the scientists, a number of compounds that may prevent or treat replication of the virus are under investigation, which should be ‘high priority’.

The researchers recommend preventing EBV transmission through good hygiene by hand-washing and avoiding oral contact, such as kissing, with infected people.

Epstein-Barr is the virus that causes glandular fever, or ‘mononucleosis/mono’, with swollen glands and fatigue being typical symptoms.

It affects young people the most, passed through blood and semen, and most commonly saliva – even in the smallest amounts such as drinking from the same glass as someone.

It can show no symptoms for up to seven weeks after infection, and a person remains a carrier of EBV for life.

EBV has already been linked to MS and some cancer, according to Cancer Research UK – overall, less than one in 300 UK cancer cases are caused by EBV.