Doctors need to double the dose of antibiotics they give to patients with gonorrhoea because it’s becoming resistant to medicine, experts have warned.

The British Association for Sexual Health and HIV (BASHH) today issued new guidelines for treating the STI for the first time since 2011.

Its recommendations follow news released earlier this month that two women in the UK caught ‘super gonorrhoea’ – one of whom was the first to ever catch it in Britain.

BASHH urges doctors to stop using one of the routine antibiotics and to increase the dose of another in what it called ‘a major change’. 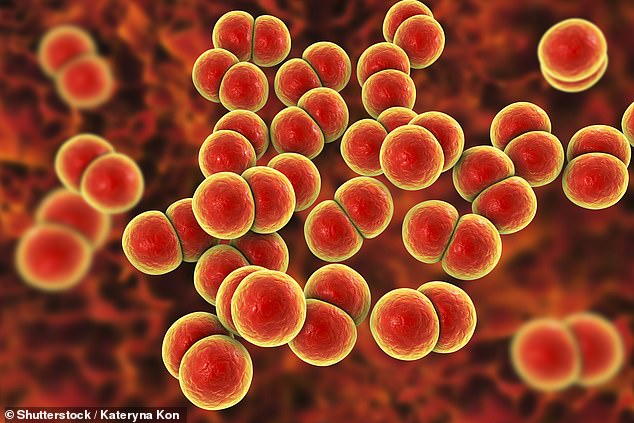 The bacteria which cause the STI gonorrhoea (pictured – a 3D illustration of Neisseria gonorrhoeae) are rapidly evolving to be able to survive antibiotics, therefore doctors are being urged to take more drastic lines of treatment to keep the infection under control

The BASHH recommendations include upping the dose of ceftriaxone – the front-line medication – from 500mg to 1g given by injection.

The 1g is four times as high as the 250mg dose recommended by the World Health Organization.

And BASHH said doctors should stop giving patients azithromycin, which used to be combined with ceftriaxone as a first resort.

Resistance to azithromycin is becoming too high, BASHH said, with up to nine per cent of infections being too strong for the drug.

BASHH’s third recommendation suggests using another, more powerful antibiotic straight away if a patient’s infection is likely to survive the initial treatment.

This drug – ciprofloxacin – has in the past been reserved for infections that the first line of treatment failed to cure.

In their report, BASHH experts wrote: ‘The move to ceftriaxone monotherapy represents a major change from the 2011 guideline.

‘There is a lack of high quality evidence regarding the best strategy to delay the emergence of resistance.

‘A high level of vigilance [including the] follow up of patients and test of cure coupled with maintenance of strong surveillance is vital in order to monitor the impact of this approach.’

Gonorrhoea is one of the most high profile infections known to be fighting back against antibiotics.

Overuse of the medications and constantly evolving strains of bacteria mean once-effective treatments no longer work every time.

On January 9 this year, Public Health England revealed two women in the UK had been diagnosed with ‘super gonorrhoea’ and required hospital treatment to be cured.

The women are believed to have been only the second and third people from the country to have caught it, after a man contracted it from a woman in Thailand last year.

Typical symptoms include discharge from the penis or vagina, pain when urinating, swelling of the foreskin, bleeding in between periods and abdominal pain.

If left untreated gonorrhoea can cause life-threatening and permanent health problems including infertility, pelvic inflammatory disease and arthritis.

WHAT IS ANTIBIOTIC RESISTANCE?

Antibiotics have been doled out unnecessarily by GPs and hospital staff for decades, fueling once harmless bacteria to become superbugs.

The World Health Organization (WHO) has previously warned if nothing is done the world is heading for a ‘post-antibiotic’ era.

It claimed common infections, such as chlamydia, will become killers without immediate solutions to the growing crisis.

Bacteria can become drug resistant when people take incorrect doses of antibiotics or if they are given out unnecessarily.

Chief medical officer Dame Sally Davies claimed in 2016 that the threat of antibiotic resistance is as severe as terrorism.

Figures estimate that superbugs will kill 10 million people each year by 2050, with patients succumbing to once harmless bugs.

Concerns have repeatedly been raised that medicine will be taken back to the ‘dark ages’ if antibiotics are rendered ineffective in the coming years.

In addition to existing drugs becoming less effective, there have only been one or two new antibiotics developed in the last 30 years.

In September, the WHO warned antibiotics are ‘running out’ as a report found a ‘serious lack’ of new drugs in the development pipeline.

Without antibiotics, C-sections, cancer treatments and hip replacements will become incredibly ‘risky’, it was said at the time.