Home » Health News » Do not put garlic in your vagina, gynaecologist urges women

Do not put garlic in your vagina, gynaecologist urges women as she warns it is the ‘perfect area’ for killer botulism bacteria found on raw cloves to grow

A gynaecologist has urged women to not put garlic in their vagina to treat yeast infections.

Dr Jen Gunter, based in California, went on a Twitter rant about the old wives’ tale, which recommends putting a clove inside the vagina for up to three days.

There are no studies to support the claim garlic has antifungal properties – apart from in a petri dish – and it could be a serious risk for further infections, Dr Gunter said.

The vagina is the ‘perfect’ environment for the botulism bacteria to grow, which can be life-threatening and lead to paralysis.

It’s not the first time doctors have busted similar myths, including one claiming parsley in the vagina can induce periods. 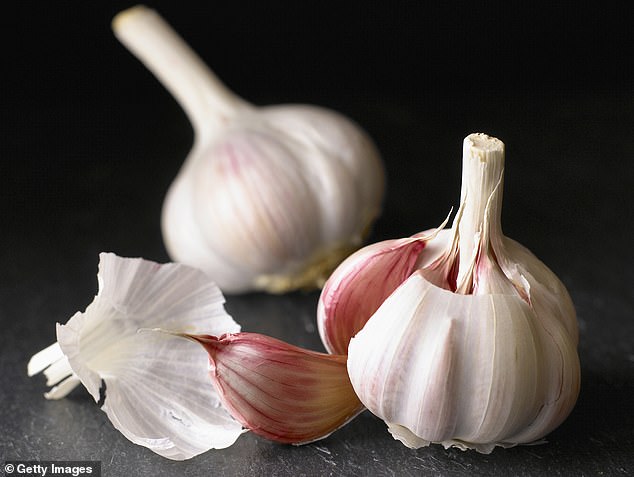 The old wives’ tale claiming garlic can treat a yeast infection, still used today, recommends inserting the herb for up to three days 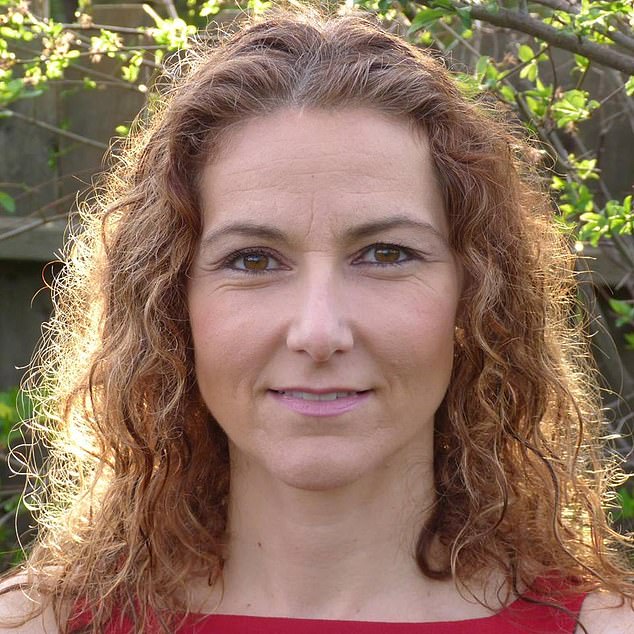 Dr Jen Gunter, a gynaecologist based in California, went on a twitter rant to warn women about putting garlic in their vaginas to treat yeast infections 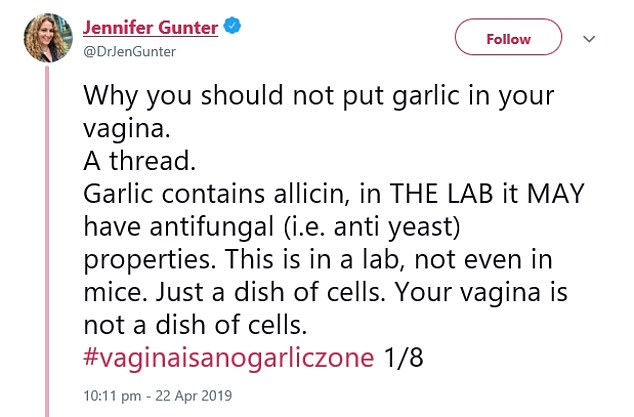 There are no studies to support its antifungal properties – apart from in a lab, Dr Gunter wrote 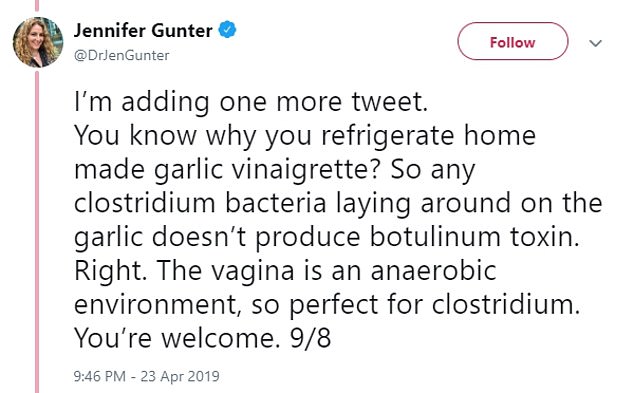 Dr Gunter, a health columnist and author of a book called The Vagina Bible, wrote on Twitter: ‘My advice, do not take medical advice from anyone recommending vaginal garlic for yeast or anything else.’

The now viral twitter thread started off by explaining that garlic contains allicin, which in the lab has shown to have antifungal properties.

She delved into the serious risks of garlic, firstly because it could have bacteria from the soil on it.

‘Bacteria from the soil can be pathogenic – bad for the body. That’s why we clean wounds,’ Dr Gunter wrote.

‘If you actually happen to have an inflamed yeasty vagina that soil bacteria would be more likely to infect.’

Garlic could also cause biofilms to form, which are a collection of microorganisms such as plaque on teeth.

‘You do not want them to form especially when you have yeast,’ Dr Gunter said. 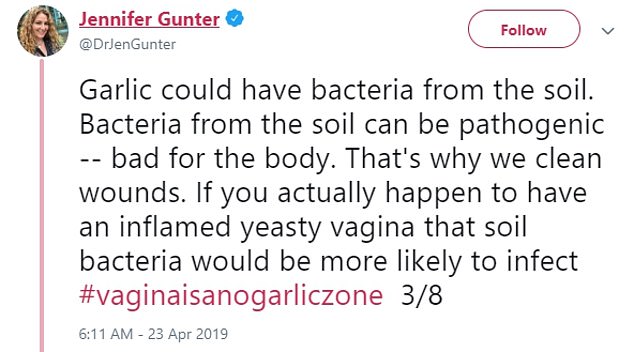 The expert delved into the serious risks of garlic, firstly because it could have bacteria from the soil. This includes clostridium bacteria which could produce poisonous toxins

Botulism, produced by the bacterium Clostridium botulinum, causes an unpleasant poisoning with nerve paralysis and weakness.

These toxins are some of the most powerful known to science, according to the NHS.

They can thrive in canned foods, deep wounds and the stomach.

Between 2000 and 2006, just six cases of food-borne botulism were reported in England.

These symptoms normally occur within a day but can be as late as a week after eating the food.

Antitoxins can slow down the process and allow recovery.

Most people make a complete recovery, although five to ten per cent of cases are fatal.

The same toxin is used for cosmetic Botox procedures, to paralyse facial muscles and reduce wrinkles.

But the most concerning risk Dr Gunter warns of is clostridium bacteria, found in soil, which may be on the garlic.

The bacteria themselves aren’t harmful, but they can produce one of the most poisonous toxins when deprived of oxygen, such as in closed cans or bottles.

Dr Gunter said: ‘You know why you refrigerate home made garlic vinaigrette? So any clostridium bacteria laying around on the garlic doesn’t produce botulinum toxin. Right. The vagina is an anaerobic environment, so perfect for clostridium.’

Botulism, a condition caused by clostridium botulinum bacteria, can be caused when someone eats food containing the toxins because it hasn’t been properly canned, preserved or cooked.

It needs hospital treatment as the toxins attack the nervous system and cause paralysis. This is fatal in five to ten per cent of cases, according to NHS.

Part of the problem, Dr Gunter said, is women self diagnosing and treating problems that may not be there, further throwing off the balance of the vagina.

She said: ‘As 50 to 70 per cent of women who self treat for vaginal yeast never actually had a yeast infection you can’t say much, except half of them never had yeast to begin with so the irritation they had may have been a temporary thing and resolving wasn’t garlic relate [sic].’

One tweeter, Raquelle Jason, hit back at the expert and said the home remedy had helped her and others she had told when prescriptions were not available

Dr Gunter claimed many people who use the ‘remedy’ – who may just experience a strong placebo effect – are doing it wrong.

Without crushing the garlic, the possible anti fungal allicin is not released, Dr Gunter said.

One tweeter, Raquelle Jason, hit back at the expert in the belief that big pharmaceutical companies are scaring people away from natural remedies.

She said: ‘You are wrong. Garlic has helped me and everyone else I’ve told about it when prescription meds were not possible.’

She posted the recipe which she uses herself, requiring garlic to be inserted in a gauze made of dental floss for 12 hours for three days.

A vaginal yeast infection causes irritation, discharge and intense itchiness. The most common are bacterial vaginosis or thrush.

It affects three in four women at some point in their lives, according to the Mayo Clinic.

The vagina is designed to keep itself clean with the help of natural secretions and there are lots of bacteria inside to protect it.

The bacteria help keep the pH balance, produce bacteriocins (naturally occurring antibiotics) and produce a substance that stops invading bacteria sticking to the vagina walls and causing damage to tissue, according to the NHS.

If the balance of bacteria is disturbed, this can lead to infection.

WHAT ELSE HAVE DOCTORS WARNED WOMEN NOT TO PUT IN THEIR VAGINAS?

A bizarre suggestion was made in January 2019 by women’s magazine Marie Claire that parsley could induce periods.

Women may want to make their period come sooner as a means of controlling their cycle ahead of a holiday or special event.

According to the article, parsley is an emmenagogue – a substance that increases menstrual flow – which can ‘soften the cervix and level out hormonal imbalances’.

Doctors, including Dr Shazia Malik, a London-based obstetrician-gynaecologist, uged women to never insert vegetables into the vagina, as it could lead to health risks – including potentially death.

Marie Clare has now apologised for the article and taken it down because it is ‘misguided’.

Experts urged women not to use trendy apple cider vinegar to ‘tighten’ their vaginas in October 2017 after online blogs and forums encouraged women to carry out the bizarre douching technique.

Aside from vinegar being completely ineffective at tightening the vagina, Professor Linda Cardozo from the Royal College of Obstetricians and Gynaecologists in London warns it could disrupt the organ’s delicate ‘good’ bacteria, putting women at risk of irritation and infections.

Women who use intimate-health products are more at risk of bacterial, fungal and urinary tract infections (UTIs), research in April 2018 from the University of Guelph, suggested.

Vaginal wipes double the risk of a UTI, while lubricants and moisturising creams increase women’s susceptibility to thrush by 2.5 times, the study found.

A gynecologist slammed Gwyneth Paltrow’s suggestion for women to put jade eggs up their vaginas as ridiculous and dangerous.

Women, Paltrow explained through an interview with her ‘beauty guru/healer/inspiration/friend’, should clench the egg inside them all day to exercise their pelvic floor.

But acclaimed gynecologist Dr Jen Gunter warned in January 2019 that the whole idea is nonsense – and could even increase the risk of bacterial vaginosis or deadly toxic shock syndrome.

Doctors warned about this procedure after Mel B, 43, revealed she had the insides of her vagina scraped out and new tissue put inside after her bitter divorce with ex-husband Stephen Belafonte.

The procedure, which has been largely unheard of until Mel B spoke out, could lead to a serious risk of infection, experts have said.

Dr Jen Gunter – gynaecologist, obstetrician and author of The Vagina Bible – told Refinery29 that women should ‘never, ever have their vagina scraped’ – or even douched – which cleans the vagina using a douche and fluid.

She said: ‘Any scraping of the vaginal epithelium [tissue] could affect the vaginal ecosystem and theoretically could spread HPV locally and would increase a woman’s vulnerability to infection.

She added that the vagina regenerates itself every 96 hours and the surface cells are shed every four hours.

Doctors expressed concern in January 2019 that people would bath bombs as a sex toy.

Dr Vanessa Mackay, spokesperson for the Royal College of Obstetricians and Gynaecologists, told The Metro: ‘We would strongly discourage the use of bath bombs internally as these could disturb the fragile balance of good bacteria inside the vagina.

‘This natural flora helps to protect the vagina and disrupting it could lead to irritation, inflammation and infection, such as bacterial vaginosis or thrush.’