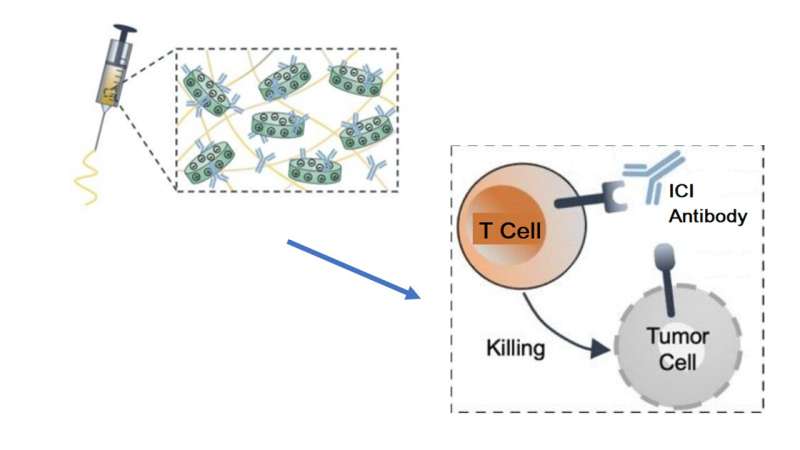 Researchers at the Terasaki Institute for Biomedical Innovation (TIBI) have developed and optimized a minimally invasive method for more targeted, efficient, and sustained delivery of immunotherapeutic treatments for cancer. Such a targeted approach cuts down on the higher dosages and possible deleterious side effects that are experienced when more systemic treatment methods are employed.

There are many ways by which the body responds to abnormal cells or foreign invaders. One mechanism involves the T-cells of the immune system, which have proteins on their surface called “checkpoint proteins.” These checkpoint proteins bind to proteins on the surface of other cells, and this can result in either stimulation or suppression of T-cell activity. Stimulation of the T-cells leads to the destruction of abnormal or invading cells, while suppression is a built-in mechanism to prevent the immune system from attacking the body’s own normal cells.

Tumor cells, however, can sometimes display surface proteins which outwit the immune system by binding to T-cells and suppressing their activity; this allows the tumor cells to grow and spread. In recent years, “immune checkpoint inhibitor” antibodies (ICIs) have been developed which will block tumor cell binding to the T-cells. In effect, this re-activates the T-cell’s immune response to destroy tumor cells. In the United States, ICIs have been used successfully to treat cancers in the kidney, bladder, liver and head or neck areas.

These ICIs are commonly administered through systemic injection, and although these antibodies have demonstrated efficacy, their effects vary among patients. For some patients, the nonspecific nature of this delivery can lead to excessive T-cell stimulation that can produce toxic side effects. Systemic drug delivery also dilutes the ICI’s effectiveness, necessitating higher dosages and higher costs.

The main feature of the TIBI team’s approach was an injectable gelatin biomaterial containing disk-shaped silicate nanoplatelets mixed in. The nanoplatelets contained charged surfaces which were optimal for protectively binding to ICIs, while using minimally invasive injection to deliver the ICI-loaded biomaterial to the tumor site.

The gelatin/nanoplatelet mixture was optimized for more effective ICI delivery and sustained drug release. The team also demonstrated that several factors such as nanoplatelet, gelatin and ICI concentration, pH and conditions for biomaterial degradation could be tuned for controlling ICI release appropriate for specific tumors.

The researchers conducted additional experiments to measure the efficacy of their shear-thinning biomaterial (STB), which deforms under stress during injection and quickly self-recovers afterward. These STB were used to inject ICIs into melanoma tumors in mice. Their findings showed that melanoma tumors in these mice showed the slowest tumor growth and smallest size, as well as clear margins between the tumor and skin layer and a lack of inflammation and necrotic tissue; these effects occurred to a much higher degree and were maintained over a longer period than the negative control samples, due to the sustained ICI release and delivery.

The number of T cells activated due to ICI delivery was quantified, and it was found that the samples with STB-delivered ICIs had over 44% more T helper cells and almost 36% more T killer cells than those of the negative controls.

Finally, tumor cell death was investigated. Experiments with different staining techniques showed that there was up to 13.2 times more tumor cell death in STB-delivered samples than in negative control samples.