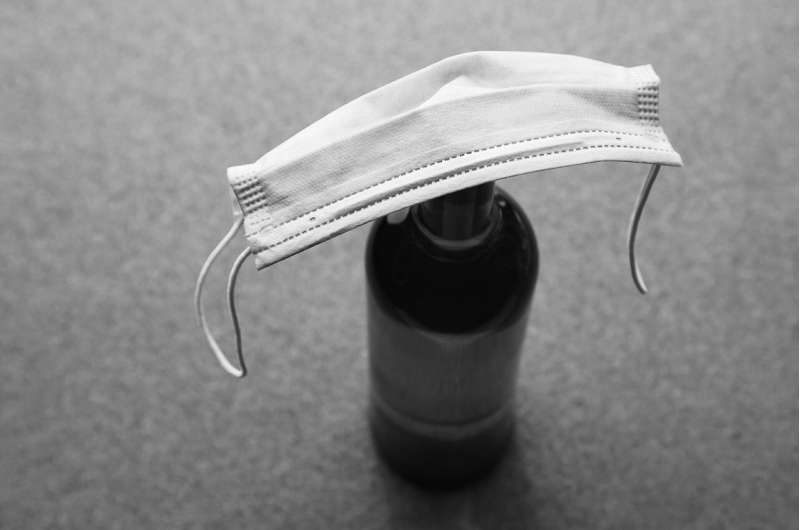 “The Quarantini,” “Pandemic Punch,” “Corona Sunrise”: Recipes for cocktails with names such as these began flooding the internet in early 2020, as countries went into lockdown and COVID-19-related hospitalizations and death rates began to soar. The humor in the names might have helped distract from a grim reality: alcohol-related deaths were on the rise, shooting up 25% in 2020 over alcohol-related deaths in 2019.

“There are multiple reasons why people were drinking more and why we’re now seeing additional morbidity and mortality related to alcohol,” says Margie Skeer, Weiner Hailey Family Professor and an associate professor of public health and community medicine at Tufts University School of Medicine.

In a recent study, researchers from the National Institute on Alcohol Abuse and Alcoholism highlighted the sharp rise in alcohol-related deaths. As the New York Times reported, between 1999 and 2019, the average annual increase in alcohol-related deaths was 3.6%. Although that average had begun growing—between 2018 and 2019, there was a 5% increase—the dramatic surge during the first year of the pandemic shows that COVID-19’s toll extended far beyond the illness and its effects.

To help parse the ways in which alcohol consumption contributed to that toll—and to discuss both ramifications and steps individuals can take to curb potentially damaging new habits—Tufts Now spoke with Skeer, whose research focuses on behavioral intervention development and substance use and addiction.

Tufts Now: How surprised are you by the finding that, from 2019 to 2020, there was such a sharp increase in alcohol-related deaths?

Margie Skeer: I am not surprised at all. When the pandemic hit, everybody’s world got turned upside down. There was so much uncertainty. People were worried about whether they could pay their bills, their rent, their mortgage, their car payments, or even feed their families—that was a huge emotional stressor, in addition to all the other stressors people were already dealing with. As a result, depression, anxiety, and other mental health problems increased. Any time you see something like that happen, substance use tends to go up: people turn to it as a coping mechanism. And we know from data that sales of alcohol went up significantly in March 2020 as people were increasing the quantity and frequency of their alcohol use.

Then, in addition to increased stress and increased mental health problems, people were bored. With quarantine, lockdown, and kids staying home from school, people didn’t know what to do. Drinking was something to do.

On top of that, liquor stores were considered essential businesses during lockdown—along with grocery stores. What message does that send? You end up with this perfect storm of people having significant mental health issues associated with stress and anxiety, being totally bored, and the world around us saying, well, alcohol is essential.

Did obstacles to treatment play a role?

Yes. That perfect storm I described applies to the average person who maybe drinks moderately and whose use begins increasing as patterns and habits form. Imagine people who were already struggling with substance use disorder or alcohol use disorder. Suddenly, all of their safety nets were gone. If they were in recovery, attending 12-step meetings, or trying to get help, everything just absolutely fell away. People were deferring care, because it was difficult to get access to medical providers and other resources. They couldn’t get their medications or, because of the chaos of COVID, they weren’t taking their medications.

The study noted the increase in alcohol-related deaths applied to both men and women across every ethnic and racial group—but for young adults, the increase was particularly high: 40% over the previous year. What might explain the extremity of the increase for that group, and what are the potential consequences?

In general, 18- to 25-year-olds have the highest rates of use across almost all substances. They tend to drink more and, as a result, are more likely to be involved in riskier behaviors that lead to fatal outcomes, such as driving while intoxicated. So it might make sense that we saw such an increase within the younger age group. And the long-term ramifications are serious, not just in terms of deaths but illness as a whole. We know that excessive alcohol use is strongly associated with other behavioral health problems: risky sexual behavior, unwanted sex and sexual assault, and, again, violence, injury, and accidents. So it’s very likely there will be increased behavioral risks as well as health problems such as liver issues and cancer.

Then, just by the nature of individuals in that group having longer to live, we are likely to see them develop longer-term health problems. If you start seeing alcoholism in 60-year-olds, they might have another 20 years to live with the effects; if you see it in 30-year-olds, they’re going to have a lot longer to experience the impacts.

Is there hope for people who are struggling now with recent changes in drinking habits or the difficulty of obtaining help over the past couple years?

In the beginning, in part because virtual systems weren’t yet set up, telehealth and other resources might not have been as effective or robust as they could have been. It was a foreign idea that people had to wrap their heads around very quickly, and everyone was scrambling to try to get structures in place. But there’s been perhaps a hopeful byproduct of COVID for some people who, even before the pandemic, were having trouble getting to support meetings or accessing help. Now we know how to offer support online, and, if you wanted to, you could attend a 12-step meeting over Zoom every hour of every day, across the globe—there is always a meeting happening that anyone with access to technology can join. For those without access, traditional supports are operating again.

As for taking the first steps to dial back on consumption that might have increased during the pandemic, it’s interesting: alcohol consumption went up during COVID, particularly in 2020. That’s a fact. However, there was nationally representative data from that year that showed that in the last quarter, 85% of people perceived that, as a result of COVID, they drank the same or less. In other words, only 15% of people perceived that they drank more. So one thing we need to do is really take a look at our patterns. Ask yourself: have they changed from what they were before COVID? Even if people don’t feel that there’s a problem, just looking and asking, “What does an extra drink a day, or an extra two drinks a week, mean for my long-term health?” can be important.