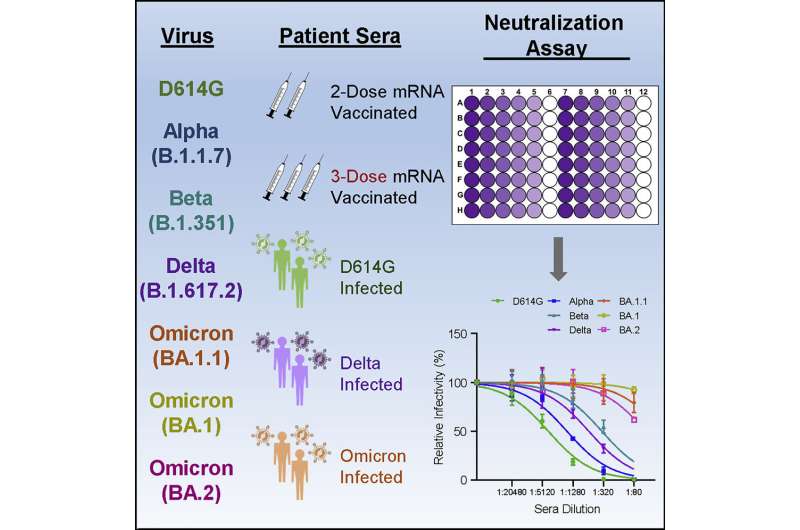 Researchers tested neutralizing antibody levels against the BA.2 and BA.3 omicron variants and deltacron, a recombinant variant created by the exchange of genetic material between delta and omicron.

Results showed that a third mRNA vaccine dose was required to generate a high enough concentration of antibodies to neutralize BA.2 and deltacron, as well as other sublineage omicron variants, including the original, known as BA.1, and BA.1.1. Antibodies produced by just the two-dose series of mRNA vaccines were enough to neutralize BA.3—a sign this variant is not likely to produce a new surge of omicron infections, researchers say.

These findings were published today (May 18, 2022) in a letter to the editor of the New England Journal of Medicine (NEJM), and in an article published in Cell Host & Microbe on April 25, by a group of Ohio State University researchers.

“Three doses is better for everything,” said Shan-Lu Liu, the senior author of both studies and a virology professor in the Department of Veterinary Biosciences at Ohio State.

Recent national data have suggested that the BA.2 variant constitutes about 90% of COVID-19 cases in the United States.

“People have been asking about the recombinant deltacron and also BA.3, and now we have an answer. And it’s good news,” said Liu, also associate director of the university’s Center for Retrovirus Research and a program co-director of the Viruses and Emerging Pathogens Program in Ohio State’s Infectious Diseases Institute.

“Based on the neutralization pattern, one booster shot can protect against BA.2 and deltacron, and we do not suspect that BA.3 will become predominant because it’s sensitive to neutralization by even two doses.”

In the study published in NEJM, researchers tested antibody levels in serum from 10 health care professionals at Ohio State’s Wexner Medical Center. After two vaccine doses, on average, antibody levels were 3.3-fold and 44.7-fold lower against BA.3 and deltacron, respectively, than those that neutralized the parent SARS-CoV-2 virus. After the booster, antibody levels were much higher against all variants tested, and the same antibody level reductions were 2.9-fold and 13.3-fold—showing a dramatic improvement in protection, particularly against deltacron.

Next examining blood samples from 18 patients in the ICU during the delta wave of the pandemic, the researchers found comparable levels of antibodies against the parent virus and BA.3, but 137.8-fold lower concentrations against deltacron compared to the parent virus. Blood samples from 31 hospitalized non-ICU patients during the omicron surge showed much better antibody protection against deltacron.

“For two vaccine doses, health care workers had very weak neutralizing antibody concentrations against the omicron variants, but after the booster it evened out,” Evans said. “The neutralizing antibody levels were still lower against omicron compared to the parental virus, but much more comparable across variants and much higher. So the booster provides much stronger protection and much broader protection.”

Patients with delta or omicron infection were similarly protected against their respective infectious variants, and a vaccine dose on top of infection improved protection. Among all of the health care professionals and infected patients studied, people who had received three vaccine doses had the broadest and strongest antibody protection overall.

The researchers conducted the cell-culture studies using pseudoviruses—a non-infectious viral core decorated with different SARS-CoV-2 spike proteins on the surface structured to match known mutations. The method used to detect neutralizing antibodies in the blood samples accounted for the varying concentrations of antibodies produced by individuals.

Liu and colleagues have completed additional tests of neutralizing antibody responses to the BA.2.12.1, BA.4 and BA.5 omicron sublineages. In a paper posted May 17 on the bioRxiv preprint server, they described similar findings: A booster provided sufficient antibody concentrations against these three additional omicron subvariants, though to a lower extent than protection seen for BA.1 and BA.2, and previous omicron infection did not offer effective antibody protection against these variants.

Liu’s lab is continuing this work, investigating how long antibody protection from the third booster shot lasts. Waning antibody levels seen in blood samples collected the furthest out from the third dose suggest there is a limit to the first booster’s durability, Liu said.