A study found the hypertension drug losartan – often known by its brand name Cozaar – reduces how much people are affected by a developed fear.

Losartan blocks the hormone angiotensin, which causes blood vessels to become narrower and may also be involved in the body’s ‘fight or flight’ response when stressed.

Although early days, the researchers are optimistic losartan could ease PTSD symptoms when combined with other therapies.

But losartan sparked controversy last month when US regulators revealed it was among a host of blood pressure drugs that may have been contaminated with cancer-causing chemicals. 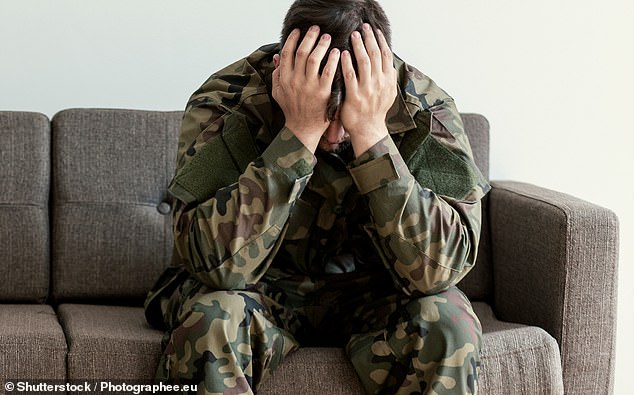 The research was carried out by the University of Electronic Science and Technology of China and led by Dr Benjamin Becker, from the key laboratory for neuroinformation.

PTSD is an anxiety disorder caused by very stressful, frightening or distressing events. Sufferers may relive the trauma via nightmares or flashbacks.

Its prevalence among the British public is unclear, but it is believed to have affected 44.7million Americans – approximately 14 per cent of the population, according to PTSD United.

Statistics from the British Ministry of Defence reveal 307 UK Armed Defence personnel had an initial assessment for the condition in 2016/17.

A study released a few years ago revealed people who have experienced severe trauma are less at risk of PTSD if they happen to be taking a blood-pressure drug that blocks angiotensin – but the link between the two wasn’t clear.

High blood pressure affects one in four adults in the UK and US, and rarely causes symptoms.

At least two million people around the world have been exposed to cancer-causing chemicals that tainted blood-pressure drugs made in China, the FDA said last month.

More than one million of those affected are in the US, which heavily relies on China for drug ingredients.

Last summer, it emerged scores of widely-prescribed drugs for heart failure and hypertension – including valsartan, losartan and irbesartan – had dangerously high levels of the recognised carcinogens NDEA and NDMA, far above the US legal limit.

This prompted a global recall that has spanned seven months – and the FDA only recently released details on how it happened and how many were affected.

The agency initially downplayed the exposure, insisted that – despite finding levels of carcinogens above the legal limit – the risk of developing cancer is not high, comparing it to cancerous byproducts that emerge when you grill meat.

However, health policy experts say the situation is much more concerning than regulators are willing to concede – for the millions put at risk and exposing America’s lopsided relationship with China.

However, if left untreated, it can lead to heart disease, kidney disease and even dementia.

Scientists have also demonstrated mice show fewer signs of fear, such as squeaking, when given losartan.

To test whether the same applies to humans, Chinese researchers trained 59 men to develop a mild fear of coloured squares by giving them a small electric shock whenever they saw one.

Electrodes on the participants’ skin then revealed they started sweating whenever they saw a coloured square, the New Scientist reported.

The men were then given either losartan or a placebo.

After 90 minutes, they were shown the same square but without an electric shock in an attempt to make them ‘unlearn’ their fear.

Results revealed those who took losartan stopped sweating sooner when they saw the square – a sign they were less panicked – than those given a sugar pill.

Although feeling uneasy around a coloured square is not as severe as PTSD, the findings are encouraging, according to Dr Paul Marvar, an assistant professor of pharmacology and physiology at George Washington University, DC.

Dr Marvar – who was not involved in the Chinese study – is investigating losartan’s effectiveness in PTSD patients when taken for ten weeks.

Another class of blood-pressure drugs are beta blockers, which commonly cause memory loss as a side effect.

It has been suggested giving people this medication after a traumatic event may stop painful memories being formed.

However, not everyone who suffers trauma develops PTSD and therefore many patients would be treated unnecessarily, Dr Marvar said.

Other beta blocker side effects can include headache, dizziness and fatigue.