As vaccination rates against the coronavirus disease 2019 (COVID-19) increase around the world, there has been a gradual decline in COVID-19-related death rates. However, many countries continue to face challenges in acquiring and administering enough vaccine doses. Additionally, growing vaccine hesitancy and the emergence of new variants of the severe acute respiratory syndrome coronavirus 2 (SARS-CoV-2) capable of evading immunity can also limit the success of global vaccination efforts.

Taken together, these factors emphasize the need for the development of effective treatments against COVID-19. In a recent Communications Biology study, researchers from John Hopkins University discuss the use of the isothiocyanate sulforaphane (SFN) for the treatment of both SARS-CoV-2 and seasonal human coronavirus (HCoV)-OC43 infections. 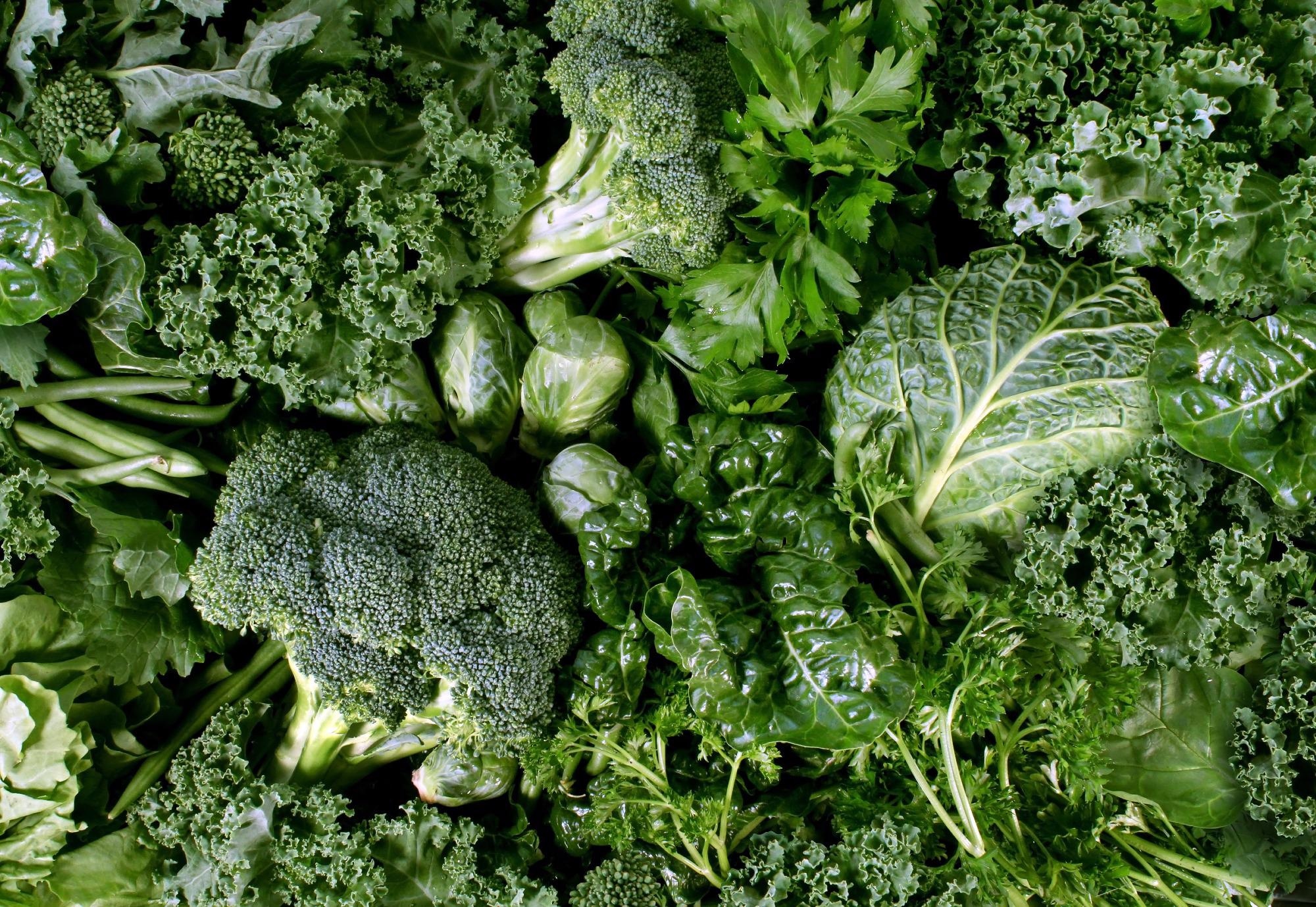 In vitro antiviral effects of SFN

In the current study, VeroC1008 cells were incubated with SFN for one to two hours before they were inoculated with either the HCoV-OC43 or the wild-type strain of SARS-CoV-2. SFN was found to effectively inhibit virus-associated cell death in a dose-dependent manner for both coronaviruses. The median inhibitory concentrations (IC50) were similar for both HCoV-OC43 and SARS-CoV-2 at 10 micromolar (µM) and 12 µM, respectively.

To confirm these results, the same assay was performed in human diploid fibroblast cell line MRC-5 using only HCoV-OC43. This assay revealed highly similar results, albeit with a slightly higher IC50 of 18µM. The cytotoxicity was similarly dose-dependent, with the median cytotoxic dose (TD50) between 73 µM and 89 µM.

Viral RNA was quantified from SARS-CoV-2-infected Caco-2 cells treated with SFN, thus revealing a dose-dependent reduction with an IC50 of 2.4 µM. Further evaluation showed that SFN is similarly effective in Vero C1008 cells against strains of SARS-CoV-2 carrying the well-established D614G mutation, including the Delta and Omicron variants, with an IC50 of 5.6 µM and 3.3 µM, respectively.

After establishing that SFN could effectively prevent coronavirus infection in cell lines, the researchers then sought to determine the ability of SFN to affect an already established infection. Both HCoV-OC43 and SARS-CoV-2 were allowed to replicate in Vero C1008 cells for 24 hours before the addition of SFN. Again, SFN was found to effectively inhibit both coronaviruses, with IC50 values of 18 µM and 13 µM, respectively.

The inhibitory effect of the SFN was similar when added before or during infection, thereby leading researchers to speculate that it has an effect on both extracellular entry and viral processes within the cell. Following this, a potential synergistic effect of SFN combined with remdesivir was explored, which revealed several effective combination ratios below the corresponding IC50 values for each individual drug.

Caco-2 cells were then modified to knockdown nuclear factor erythoid 2-related factor 2 (NRF2) before infection with SARS-CoV-2 and treatment with SFN. This experiment revealed similar reductions in viral titers in both control and knockdown cells, thus suggesting that the antiviral activity may be mediated through an NRF2 dependent pathway. 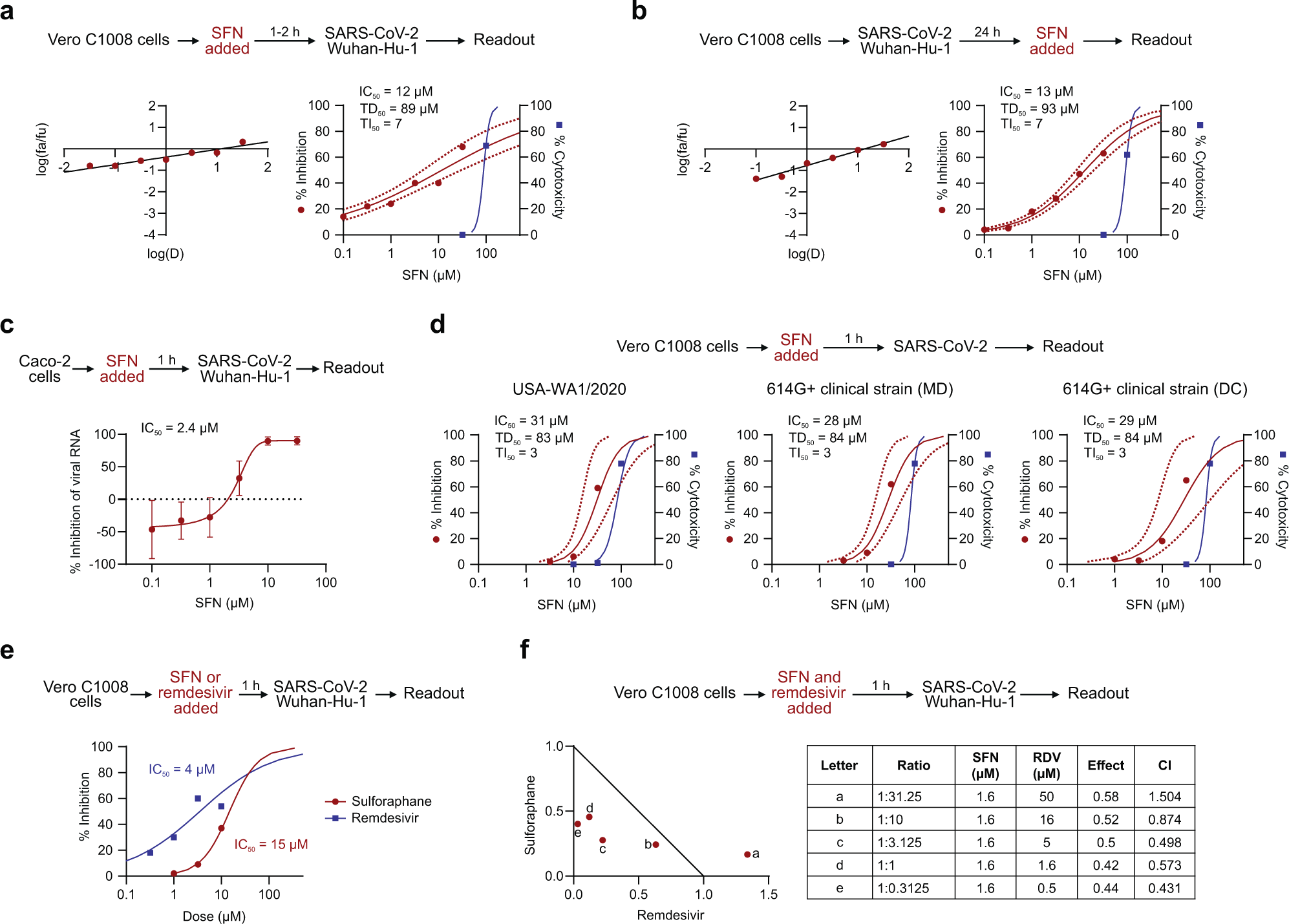 Median effect plot and dose-effect curves calculated for a Vero C1008 cells infected with SARS-CoV-2/Wuhan-Hu-1 after 1–2 h incubation with increasing concentrations of SFN; b Vero C1008 cells infected with SARS-CoV-2/Wuhan-Hu-1 for 24 h and then incubated with SFN. Antiviral data is displayed in red; anti-host cell activity (cytotoxicity) is displayed in blue. c The antiviral activity in human Caco-2 cells was determined by measuring viral RNA by qPCR. The cells were incubated with SFN for 1 h before viral inoculation. d Effects of SFN evaluated in Vero C1008 cells exposed to drug for 1 h followed by viral inoculation. A reference strain (USA-WA1/2020) and two 614G+ clinical strains of SARS-CoV-2 were evaluated for CPE using a bioluminescence readout. e Effects of SFN and remdesivir evaluated in Vero C1008 cells exposed to the drug for 1 h followed by viral inoculation. f Normalized isobologram showing combination index (CI) for combinations of various doses of SFN and remdesivir. Synergism (CI < 1); Additive effect (CI = 1); Antagonism (CI > 1); SFN, Sulforaphane; RDV, Remdesivir. Dotted lines represent 95% confidence interval. Experiments were performed a minimum of two times (range = 2–7), 3–6 replicates within each experiment, except the experiment shown in (e), which was performed once.

The researchers then sought to evaluate the antiviral effects of SFN treatment in mouse models. Transgenic mice expressing human angiotensin-converting enzyme 2 (ACE2) were inoculated with 8.4 x 106 TCID50 of SARS-CoV-2. Daily doses of SFN were administered to the mice orally, starting one day after viral inoculation.

All infected mice showed significant weight loss by day four; however, by day six, it was evident that SFN-treated mice were losing significantly less weight than controls. When examining the alveolar fluid and lung viral titers of infected mice, those treated with SFN had significantly lower viral burdens.

High-dimensional flow cytometry was then used to evaluate any changes that might have arisen in the mice treated with the immunomodulatory drug as compared to controls. Changes in the spleen showed small differences; however, these findings were not significant.

When the changes in the lungs were observed, it was revealed that SFN treatment significantly reduced the recruitment of myeloid cells in the lungs, which is often seen in COVID-19. This effect likely reduced inflammation and immune-related damage.

SFN was found to significantly inhibit SARS-CoV-2 infection both in vivo and in vitro. The significant evidence described here thus supports further research, especially given the synergistic effects of SFN with the already-approved remdesivir.

Sam completed his MSci in Genetics at the University of Nottingham in 2019, fuelled initially by an interest in genetic ageing. As part of his degree, he also investigated the role of rnh genes in originless replication in archaea.