Home » Health News » C. difficile is evolving to ‘spread in hospitals and thrive on sugar’

Superbug C. difficile which can cause diarrhoea is evolving to ‘spread in hospitals and feed on the Western diet’

The superbug Clostridium difficile (C.diff) may be evolving to spread in hospitals, research suggests.

Scientists from the London School of Hygiene & Tropical Medicine discovered the bacteria, which can cause diarrhoea, is gradually ‘splitting’ into two species.

The new bug spreads easily, is ‘immune’ to disinfectants and thrives on the Western diet of sugary foods, they found.

It is thought to have emerged thousands of years ago and may be responsible for more than two-thirds (70 per cent) of the C.diff infections in hospitals today.

The researchers hope understanding how C.diff adapts to ‘changes in human lifestyles’ will lead to better infection control. 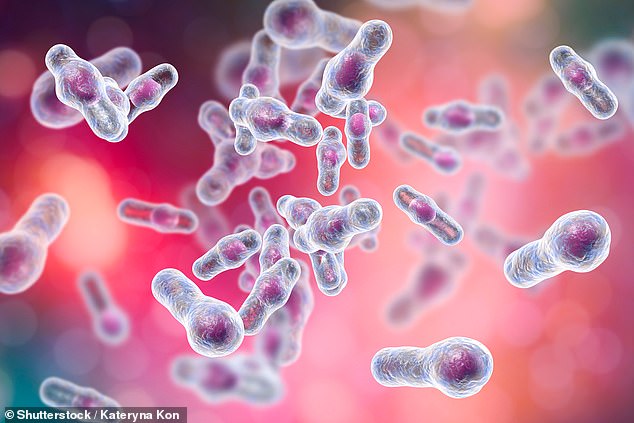 The superbug Clostridium difficile (C.diff) is evolving to spread in hospitals (stock)

‘Our large-scale genetic analysis allowed us to discover that C. difficile is forming a new species with one group specialised to spread in hospital environments,’ co-lead author Dr Nitin Kumar said.

‘This emerging species has existed for thousands of years, but this is the first time anyone has studied C. difficile genomes in this way to identify it.

‘This particular bacteria was primed to take advantage of modern healthcare practices and human diets, before hospitals even existed.’

C.diff causes watery diarrhoea, which can lead to severe dehydration. Infections are common in hospitals among already ill patients.

Outbreaks are thought to occur due to staff easily spreading the bacteria if their hands are contaminated.

Emerging research suggests the bug may also linger on sheets even after they have been washed and bleached.

And in the US, the bacteria caused an estimated half a million infections and 29,000 deaths in 2012, according to a study published in the Journal of Global Health.

C.diff infections often come about when a patient takes antibiotics, which reduce the number of ‘good bacteria’ in their gut.

This leaves them vulnerable to C.diff, which is otherwise ‘out competed’ by the ‘good bugs’.

To understand how C.diff is changing, the researchers collected 906 strains of the bacteria from humans; animals, such as dogs, pigs and horses; and the environment.

Clostridium difficile, also known as C. diff, is a bacterium that can infect the bowel and cause diarrhoea.

The infection most commonly affects people who have recently been treated with antibiotics, but can spread easily to others.

C. difficile infections are unpleasant and can sometimes cause serious bowel problems, but they can usually be treated with another course of antibiotics.

The bacteria were allowed to reproduce in the laboratory.

The researchers then sequenced each of the strains’ DNA, which they compared against each other.

Results – published in the journal Nature Genetics – suggest C. diff is evolving into a new species, which the scientists named C. difficile clade A.

C. difficile clade A made up around 70 per cent of the samples from the hospital patients.

The researchers noticed the new strain had changes to its genes that break down simple sugars.

Simple sugars are a type of carbohydrate that are found naturally in fruit and milk or can be added to sweeten foods.

This discovery prompted the scientists to study C. difficile clade A in mice.

They found the ‘new bacteria’ colonised the rodents’ guts much more efficiently when their diet was high in sugar.

The bacteria had also evolved differences in its genes that are involved in spore formation. Spores are often resistant to treatment and can be transferred between people.

These ‘tougher’ spores may give the bacteria much greater resistance to common hospital disinfectants and allow it to spread more easily in healthcare environments, the researchers claim.

Dating analysis revealed that while C. difficile Clade A first appeared around 76,000 years ago, the number of different strains started to increase at the end of the 16th Century.

This was before modern hospitals were created, with the bacteria since going on to thrive in hospitals, the researchers claim.

‘Our study provides genome and laboratory based evidence that human lifestyles can drive bacteria to form new species so they can spread more effectively,’ senior author Dr Trevor Lawley said.

‘We show that strains of C. difficile bacteria have continued to evolve in response to modern diets and healthcare systems.

‘And reveal that focusing on diet and looking for new disinfectants could help in the fight against this bacteria.’

‘It reveals the importance of genomic surveillance of bacteria.

‘Ultimately, this could help understand how other dangerous pathogens evolve by adapting to changes in human lifestyles and healthcare regimes which could then inform healthcare policies.’