A killer brain illness spread to humans by tick bites has been identified in the UK for the first time.

Public Health England (PHE) has confirmed a handful of ticks carrying encephalitis in Thetford Forest, Norfolk and on the Hampshire-Dorset border.

PHE says the risk of catching the virus is very low but ‘there is the potential for human contact’. It is currently investigating how common the infected ticks may be. 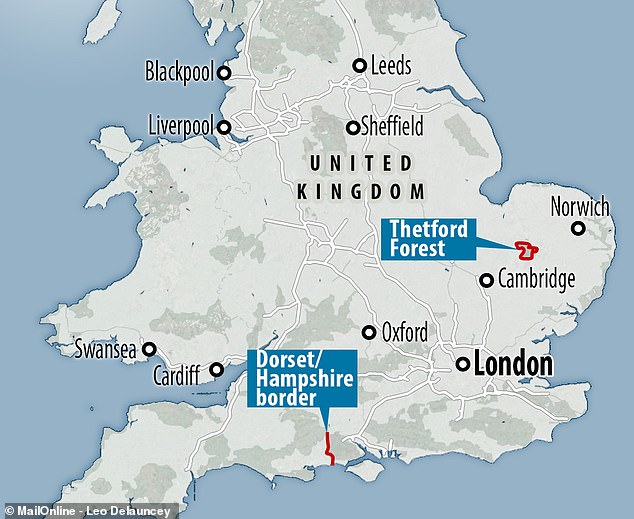 Public Health England (PHE) has confirmed the presence of tick-borne encephalitis in Thetford Forest, Norfolk and on the Hampshire-Dorset border 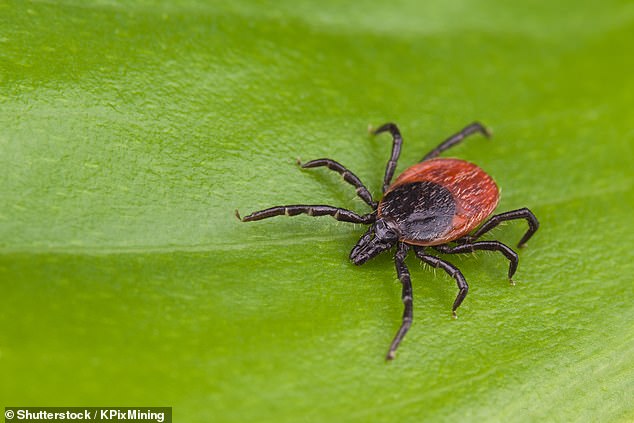 Tick-borne encephalitis (TBE) is an infection spread by tick bites.

According to the NHS, it is not found in the UK but is present in other parts of Europe, Russia, China and Japan.

Symptoms can be flu-like, such as feeling hot, headaches, aching muscles and nausea.

In severe cases, TBE can cause brain inflammation, which may lead to sufferers experiencing a stiff neck, dislike of bright lights, seizures,  behavioural changes or loss of movement.

Ticks live in forests and grassy areas. Therefore people may be more at risk if they are hiking or camping, however, not all ticks spread TBE.

If visiting an area with TBE, people can get vaccinated against the virus, with two jabs offering around a year’s protection.

This vaccine is not available on the NHS.

Until now, the virus had never been found in the UK. However, it is prevalent in most regions of Europe, China and Japan.

Ticks, small parasitic arachnids, are growing increasingly common in parts of the UK, mainly due to increasing deer numbers.

As well as living on deer, ticks can be found on other animals, such as cats, dogs and urban foxes.

Ticks, which can be about the size of a pin head, can also live on plants and long grass and grab onto people who brush past them with exposed skin. They bite by burying their head into the flesh and sucking blood from inside.

In addition to the encephalitis virus, ticks can also carry other diseases, including Lyme disease. They can also cause you to develop a potentially deadly allergy to meat.

Dr Nick Phin of PHE said: ‘These are early research findings and indicate the need for further work.

‘However, the risk to the general public is currently assessed to be very low.’

PHE said they suspect a European patient who became ill after being bitten by a tick in the New Forest area had tick borne encephalitis (TBE). They made a full recovery.

According to the Encephalitis Society, a charity which supports people affected by all types of encephalitis, less than two per cent of people die from the viral infection.

The illness begins with flu-like symptoms before progressing to a more serious second phase with meningitis and swelling of the brain in a quarter of cases.

Most patients with tick-borne encephalitis will recover, but a third may suffer long-term complications, including convulsions and paralysis.

There are no specific treatments for TBE, but preventative measures can be taken, including wearing long-sleeved tops and applying insect repellent. A vaccine exists – but it is not available on the NHS. 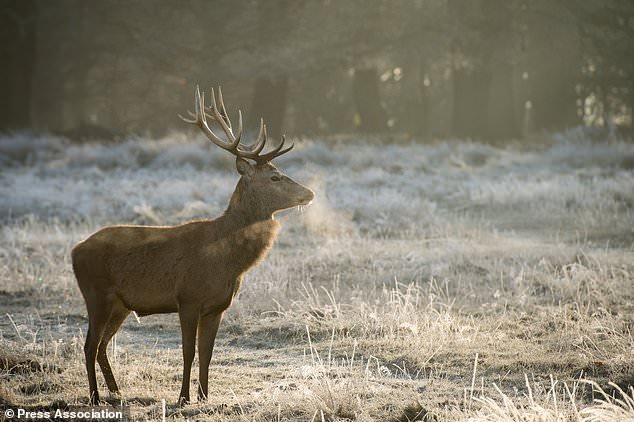 The small parasitic arachnids are becoming more common in parts of the UK, mainly due to increasing deer numbers

COULD TICK-BORNE ENCEPHALITIS BE IN THE LAKE DISTRICT?

Public Health England is investigating how common the infected ticks may be, after it found them in Thetford Forest and on the Hampshire-Dorset border.

It comes after a dog walker last year claimed he caught tick-borne encephalitis while walking his dog near Millom in the Lake District.

Tom Varga’s symptoms only came to light 10 months after he was bitten, when he began experiencing extreme fatigue, headaches and eye pain.

The sous chef was diagnosed with tick-born encephalitis. However, he admitted it was impossible to rule out he caught it in his native Hungary.

The tick-borne encephalitis virus is already present in mainland Europe and parts of Asia. It is thought infected ticks may have arrived in the UK through migratory birds.

‘We are reminding people to be “tick aware” and take tick precautions, particularly when visiting or working in areas with long grass such as woodlands, moorlands and parks,’ Dr Phin told the BBC.

The NHS advises that tick bites can be prevented by covering skin while walking outdoors, using existing paths and nature trails, applying insect repellent and checking your clothes and hair after going for a walk.

It comes after a dog walker last year claimed he caught tick-borne encephalitis while walking his dog near Millom in the Lake District.

Tom Varga’s symptoms only came to light 10 months after he was bitten, when he began experiencing extreme fatigue, headaches and eye pain.

The sous chef was diagnosed with tick-born encephalitis. However, he admitted it was impossible to rule out he caught it in his native Hungary.

Thousands of English football fans were warned about the risk of catching tick-borne encephalitis during the World Cup in Russia last summer.

The Encephalitis Society claimed the ticks can be found in Kaliningrad, Volgograd and Nizhny Novgorod – where England played their three group games.

Ava Easton, chief executive of the charity, warned they are a ‘serious health concern’ for up to 20,000 English travellers expected to make the journey.

How to prevent tick bites

Repel Ticks on Skin and Clothing

Find and Remove Ticks from Your Body