Skoltech researchers have devised a novel method for leg rehabilitation after injury or stroke that uses a brain-computer interface and electrical stimulation of the spine delivered through the skin. Created by scientists from the Institute’s Neuro and Engineering centers, the solution incorporates virtual reality and enables paralyzed patients to regain control of their lower limbs and master natural movements by reestablishing the connection between motion and intention. The system was presented at the fourth International Conference on Neurotechnologies and Neurointerfaces.

“Post-stroke patients and to some extent those having experienced spinal cord trauma frequently have to go through rehabilitation in an attempt to reconnect the intention in the brain to move the affected limb and the actual muscle movement,” the lead author of the study, Skoltech research intern Ivan Ninenko, commented.

“Our team’s achievement is that we designed a training system that brings together all of the following: a virtual reality headset that prompts the patient to initiate a leg motion toward a virtual goal and creates the illusion of independent movement, a neural interface that registers the patient’s intention to move, a robot that actually moves the leg in a natural way thanks to our own software, and transcutaneous electrical stimulation of the spinal cord, which, roughly speaking, amplifies the signal from the brain.”

The neural interface used by the researchers is an off-the-shelf device, a cap with electrodes picking up the electrical activity of the brain. However, the software part has been augmented by the scientists, who modified the protocol responsible for identifying an intention to move.

The robot, manufactured by KUKA, is an industrial collaborative manipulator equipped with highly accurate torque sensors. It is capable of guiding the patient’s leg in the direction corresponding to the goal they choose in the virtual reality. The team wrote special software that enables the robot to emulate natural limb movements, reproducing the trajectory that the leg of a healthy person would follow.

The VR goggles display multiple targets that a patient attempts to move their leg toward. Once the intended motion has been read out from the brain by the brain-computer interface and the robot performs the motion, the patient can actually see their limb moving in the virtual reality, but the robotic assistant is invisible. This causes the motion to be perceived as initiated and controlled by the brain, helping bridge the brain-muscle divide.

Finally, the last component of the system is noninvasive electrical stimulation of the spinal cord through electrodes taped to the back of the patient. The idea behind this is that neurons might be getting so-called subthreshold signals from the brain that are not strong enough to result in activation. External electrical stimulation allows this barrier to be overcome and leads to the formation of reliable neural connections that eventually will function without this artificial support. 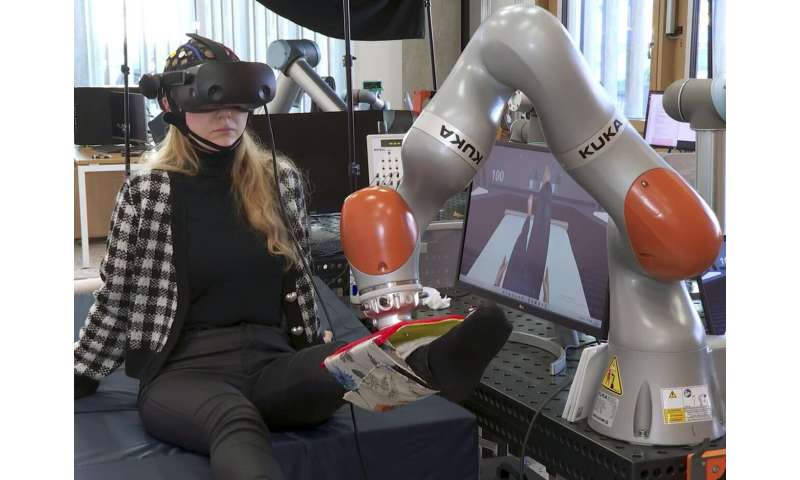 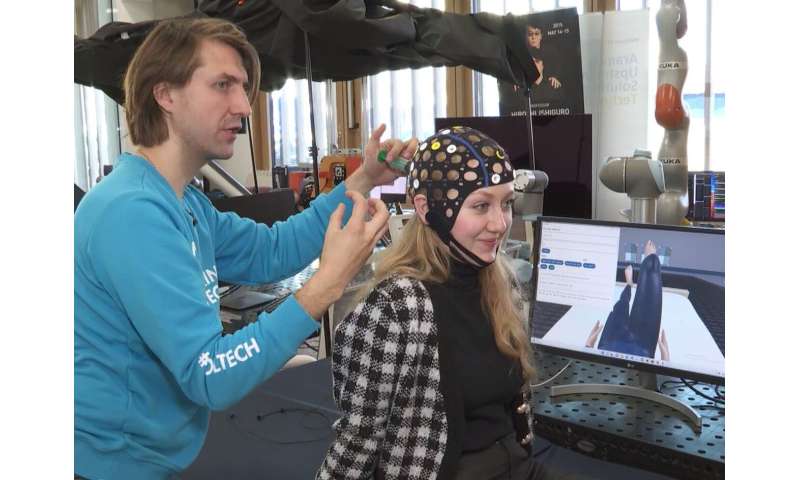 “Sales of medical robots rose in 2021 as high as 23% according to the International Federation of Robotics. A total of 14,823 medical robots were sold worldwide, mostly surgical robots and robots for rehabilitation. Our research is an important step toward understanding the demand for key functionalities on the part of the patients. Potentially, collaborating with hospitals, we can develop rehabilitation robots for the Russian market to improve the quality of life of disabled people in our country,” study co-author Associate Professor Dzmitry Tsetserukou said; he heads Skoltech’s Intelligent Space Robotics Laboratory and has experience developing rehabilitation robots and VR systems for nurse training in Japan.