Home » Health News » Boy, 8, ‘with a death sentence’ unable to get ‘wonder drug’ for CF

Schoolboy, 8, is ‘living with a death sentence’ because the NHS won’t fork out for £100,000-per-year cystic fibrosis ‘wonder drug’

A schoolboy is ‘living with a death sentence’ because the NHS aren’t able to fork out for the cystic fibrosis drug Orkambi.

George Monckton, from Oldbury, West Midlands, must take 30 pills a day, along with daily physiotherapy, to combat his decline in lung function.

Orkambi, often labelled a ‘wonder drug’, could stop the clock on the schoolboy’s lung deterioration, the main cause of death for those with cystic fibrosis (CF).

But despite being approved by the European Medicines Agency three years ago, the life-changing drug is still not available in the UK.

The NHS is in deadlock with US pharmaceutical company Vertex who is demanding £104,000 per year per patient for the drug.

Protests are due to be held outside Parliament in March to urge progress in the availability of Orkambi – which could help 50 per cent of cystic fibrosis sufferers. 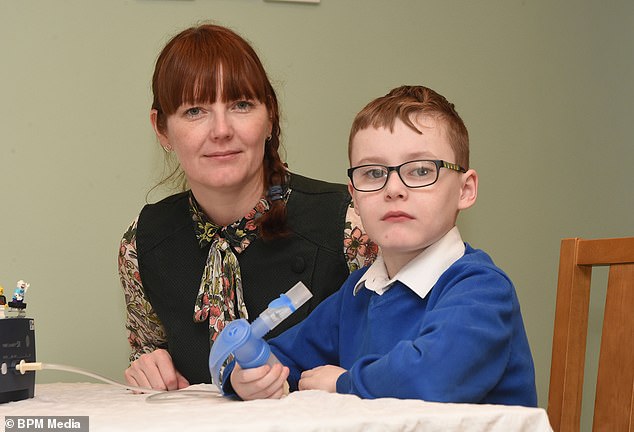 Nicola Johnson, mother to George Monckton, 8, said her son is a ‘living with a death sentence’ because a life-saving drug costing £100,000-per-year cannot be funded by the NHS 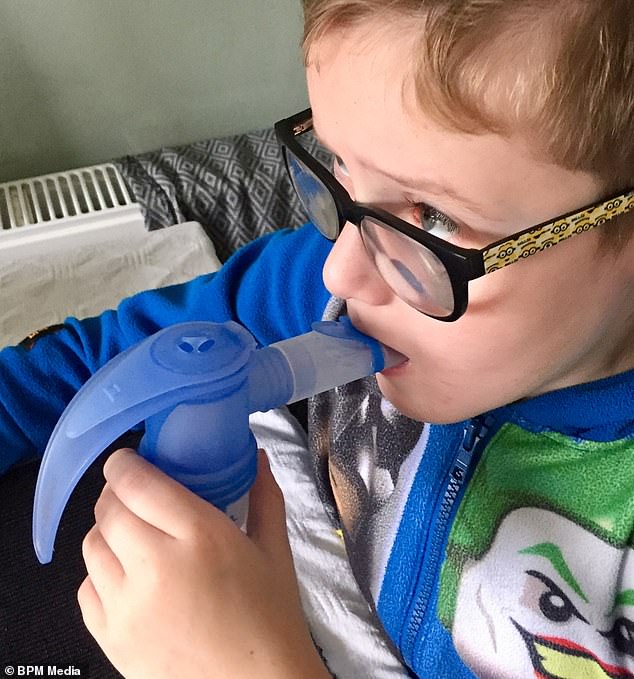 George is one of thousands of children unable to access the drug Orkambi for cystic fibrosis. Pictured, using a nebuliser to take medication 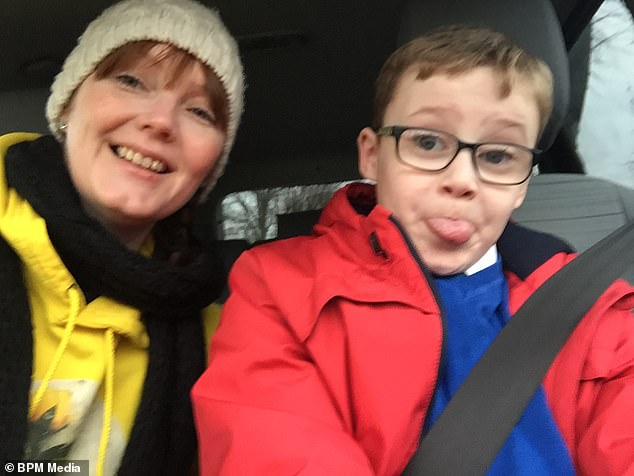 George’s mother, Ms Johnson, said she is filled with anger as the NHS remains in a deadlock with US pharmaceutical company Vertex over the price of the drug

Geroge’s mother, Nicola Johnson said: ‘Not having access to Orkambi fills me with fear, anger and a great sadness.

‘It’s like a veil over us, knowing CF can strike George and damage him at any time.

‘It’s always there. You’re getting on with life and someone talks about the future, and suddenly grief hits you.’

Conventional cystic fibrosis treatments target the symptoms, but precision medicines tackle the underlying genetic mutations which cause the condition.

Orkambi received its European license in November 2015. But despite the National Institute of Health and Care Excellence (NICE) recognising Orkambi as an important treatment, they rejected its use.

The decision was based on cost factors and the lack of long-term data on Orkambi’s effectiveness.

Vertex refused an offer from NHS England of £500million for a five-year supply, the biggest offer it has ever made, and talks have completely broken down.

Orkambi is therefore unavailable in the UK and is only ever prescribed on rare compassionate grounds.

Meanwhile, more than 200 people in the UK have died from the cruel disease, without having a chance to get the miracle drug.

Ms Johnson said: ‘It’s a remarkable drug. It means that children like George won’t having a death sentence hanging over their heads anymore.

‘When it got approved three years ago, we could have partied on the streets.

‘But we still can’t get it, and meanwhile George has got early onset liver disease.’ 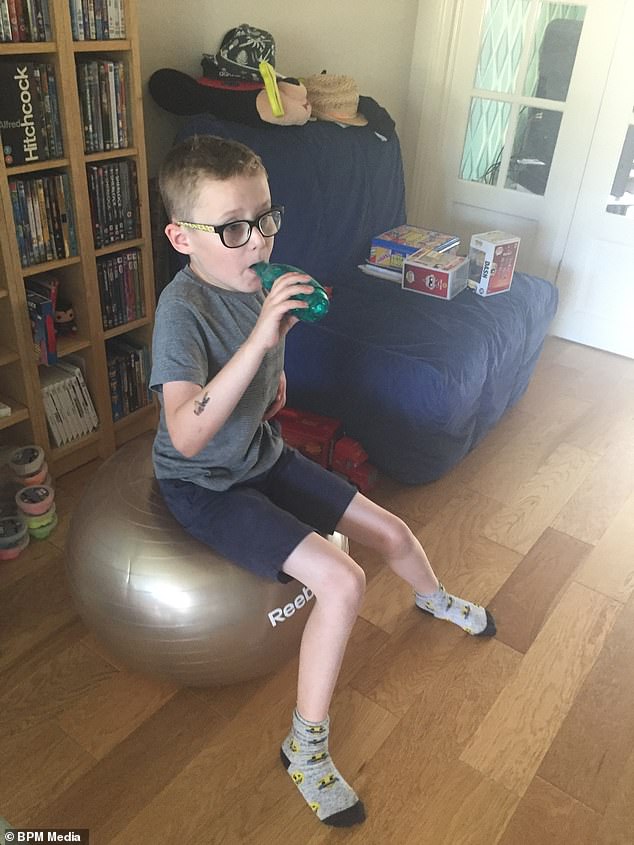 Ms Johnson and George have joined other families and taken to the streets in protest as they urge the Government to end the deadlock over the drug. US drug giant Vertex is demanding £104,000 per year per patient for the drug, and talks with NHS England have broken down 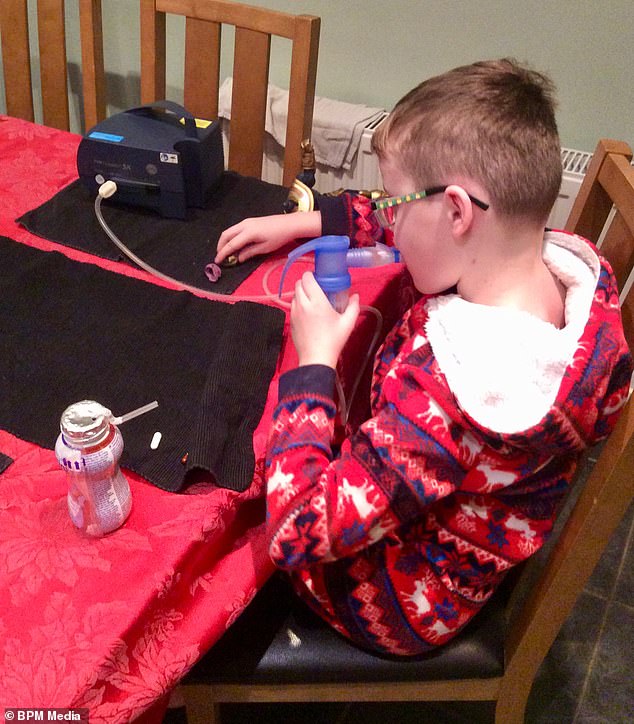 Orkambi, often labelled a ‘wonder drug’, could stop the clock on George’s lung deterioration, the main cause of death for those with CF. Pictured at home using a nebuliser 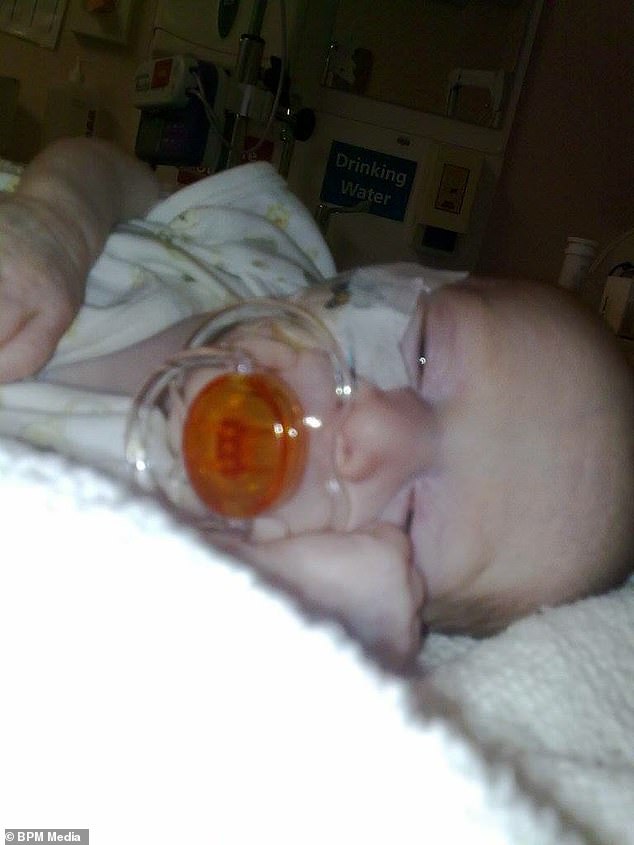 George was born with cystic fibrosis and must take 30 pills a day, along with daily physiotherapy, to combat his decline in lung function

Cystic Fibrosis, of which 30,000 people are living with in the US and 10,400 in the UK, affects the lungs and digestive and reproductive systems in particular.

Around 40 per cent of people with CF will have some liver abnormalities, although only around five to 10 per cent of the CF population will experience problems with their health as a result, according to the Cystic Fibrosis Trust.

Vertex recently announced it was confident the drug has the ‘potential to extend life’ and will soon be available in Scotland.

While the announcement was a triumph, it caused more frustration for families in England and Wales who are considering moving to Scotland.

Ms Johnson said: ‘It’s a huge amount of money. But the drug is also preventative, so it could stop the use of other drugs needed further down the line to treat other symptoms.

‘Rather than George reaching his 30s or 40 mark, Orkambi could mean he could live into his 60s.

‘The reality is that three people a week die with cystic fibrosis. We don’t know whether it would have helped them – they never had the chance to find out.’ 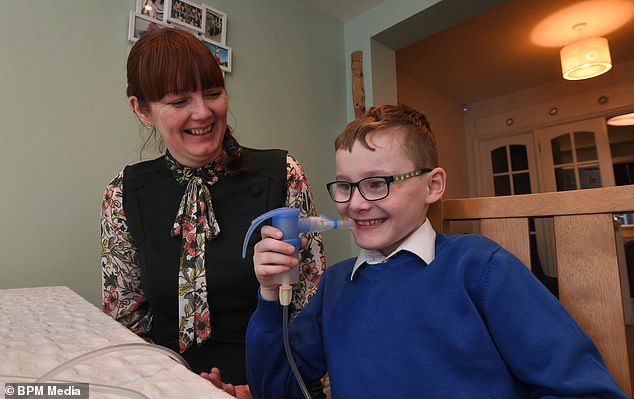 Labour’s shadow health secretary, Jon Ashworth MP, said families were now being ‘held to ransom’ by the pharma-giant, who posted a 40 per cent increase in profits at the end of the last quarter 2018 to $337million.

Mr Ashworth said: ‘Those living with cystic fibrosis who are currently denied this life-saving drug will be disgusted at these profits.

‘This big pharma firm, by refusing to play fair with the NHS, is holding lives to ransom. The price they want for Orkambi is simply unjust.

‘Ministers should step in and use what means they have to ensure an affordable version of Orkambi is available for those who need it.’

Ms Johnson and George have joined other families and taken to the streets in protest as they urge the Government to end the deadlock.

The Cystic Fibrosis Trust is organising a demonstration outside parliament on March 7 to bring attention to the continued plight of those with CF who are eligible for the medicine.

The Health and Social Care Committee Inquiry will be holding an inquiry to understand why, after three years of negotiations, the relevant parties have yet to agree on terms.

A petition, backed by Labour’s Dudley North MP Ian Austin, has also been launched, after a previous petition with over 118,000 signatures led to a debate in Parliament in March last year.

Ms Johnson said: ‘What if we don’t have a future? You think about Christmas or holidays and you think “What if we’re admitted to hospital?”

‘This is no way to live. Especially when Orkambi is sitting on a shelf just out of reach.’

Orkambi is a medication licensed for use by people in the UK with cystic fibrosis, but it is not offered on the NHS except in extreme circumstances.

The drug targets the F508del gene mutation, which affects about 50 per cent of all people with cystic fibrosis.

It is made of a combination of drugs – lumacaftor and ivacaftor – which work together to keep a healthy balance of salt and water in the lungs.

There may be more than 3,000 people with life-limiting cystic fibrosis in the UK who could benefit from the drug.

But the National Institute for Health and Care Excellence (Nice) said in 2016  may not be cost-effective enough, at £104,000 per patient per year, to be offered on the NHS.

More than 117,000 people have signed a petition calling on the Government to make Orkambi available on the NHS, and Parliament discussed the petition in March this year.

Nice is expected to review its stance on the drug in July 2019.

Daniel Bodio, an engineer from Swindon in his mid-30s, was prescribed the drug on compassionate grounds.

He said it improved his lung function from 25 per cent – when he was facing having to have a transplant – to 39 per cent within three weeks.

He told MailOnline last year: ‘The drug should be available to everyone – it brings normality to what is otherwise a difficult existence.’