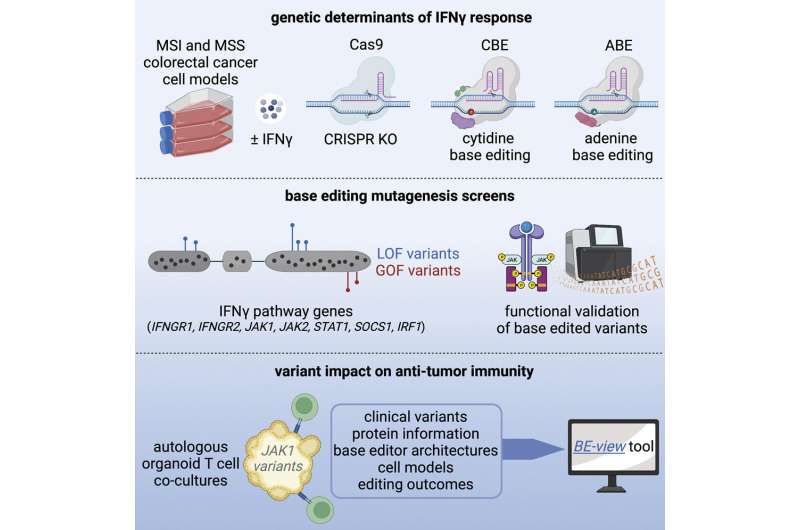 A new library documenting hundreds of mutations can help to explain why some cancers don’t respond to immunotherapies, and highlights potential pathways that could be drug targets in the future.

The researchers, from the Wellcome Sanger Institute, Open Targets, and collaborators, used CRISPR gene editing technology and mini tumors to understand the role of thousands of mutations in bowel cancer cell lines. They highlighted around 300 genetic changes that are also found clinically in tumors, with some changing how receptive the cancer cells are to the body’s immune response.

The study, published on 19 January 2023 in Cancer Cell, helps to explain the functions of these different mutations, giving a more in-depth understanding of how certain changes influence cancer. The open access resource interprets genetic mutations seen in the clinic and can start to explain different response rates of patients’ cancers to immunotherapy, along with why some tumors develop drug resistance.

Alongside this, the wider scientific community can use the resource to identify potential targets for future drug development and increase overall understanding of cell pathways.

Immunotherapies are a group of treatments that help the body’s immune system fight off cancer. While not suitable for all cancer types, immunotherapies have greatly improved treatment options for some types of bowel cancer, otherwise known as colorectal cancer, and blood cancer.

In some groups of patients, immunotherapy is not as effective at treating cancer, however the reasons behind this are not fully understood.

In this new study, from the Wellcome Sanger Institute, Open Targets, and collaborators, the team used CRISPR Cas-9 base editing to investigate mutations that influence how sensitive bowel cancer cells are to a cytokine interferon-γ (IFNγ), a key mediator of cancer cell response to immune cells.

They compared thousands of mutations to those seen in the clinic, and identified about 300 that affect how the cancer cells respond to the immune system. While some of the mutations were known before this study, it was unclear how significant and what role they had in the development of disease and treatment resistance.

The researchers also used tumor organoids, sometimes described as mini-tumors, which mimic the tumor in the body, to see the direct impact of these different mutations on the development and progression of cancer in the presence of immune cells.

As a result, the team has created a library of different mutations that affect the sensitivity of bowel cancer cells to immune cell attack. This freely available resource can be used to help explain why certain groups of patients do not respond to immunotherapy as they have a mutation that makes them less sensitive to the body’s immune response.

While further research is needed in order to inform clinical practice, this library acts as an interpreter, shedding more light on the impact of mutations on cancer and deepening clinical understanding.

Being able to see the impact of different genetic mutations on immunotherapy could also lead to more targeted treatment approaches in the future, where patients who will benefit the most from different immunotherapies can be identified. It also highlights mutations that could be targeted in drug development, leading to new therapies.

“Using gene editing technology, we were able to gain an unbiased picture of the function of thousands of mutations, which we hope will be a valuable resource for the scientific community to conduct further research. We were able to shed light on the role some of these mutations play in modulating the body’s immune response to cancer. While our research focused on bowel cancer cells, many of the mutations investigated can be found in other cancers as well,” says Dr. Matthew Coelho, first author from the Wellcome Sanger Institute and Open Targets.

“Immunotherapy has transformed cancer treatment over the last decade or so, but there are still unanswered questions about why it works for some patients’ tumors and not others. Our research has created a library documenting hundreds of mutations that influence how the tumor responds to the immune response. This can be used to further understand these differences, and hopefully in the future, help accelerate us towards precision medicine that will benefit as many people as possible,” Dr. Mathew Garnett, senior author from the Wellcome Sanger Institute and Open Targets.