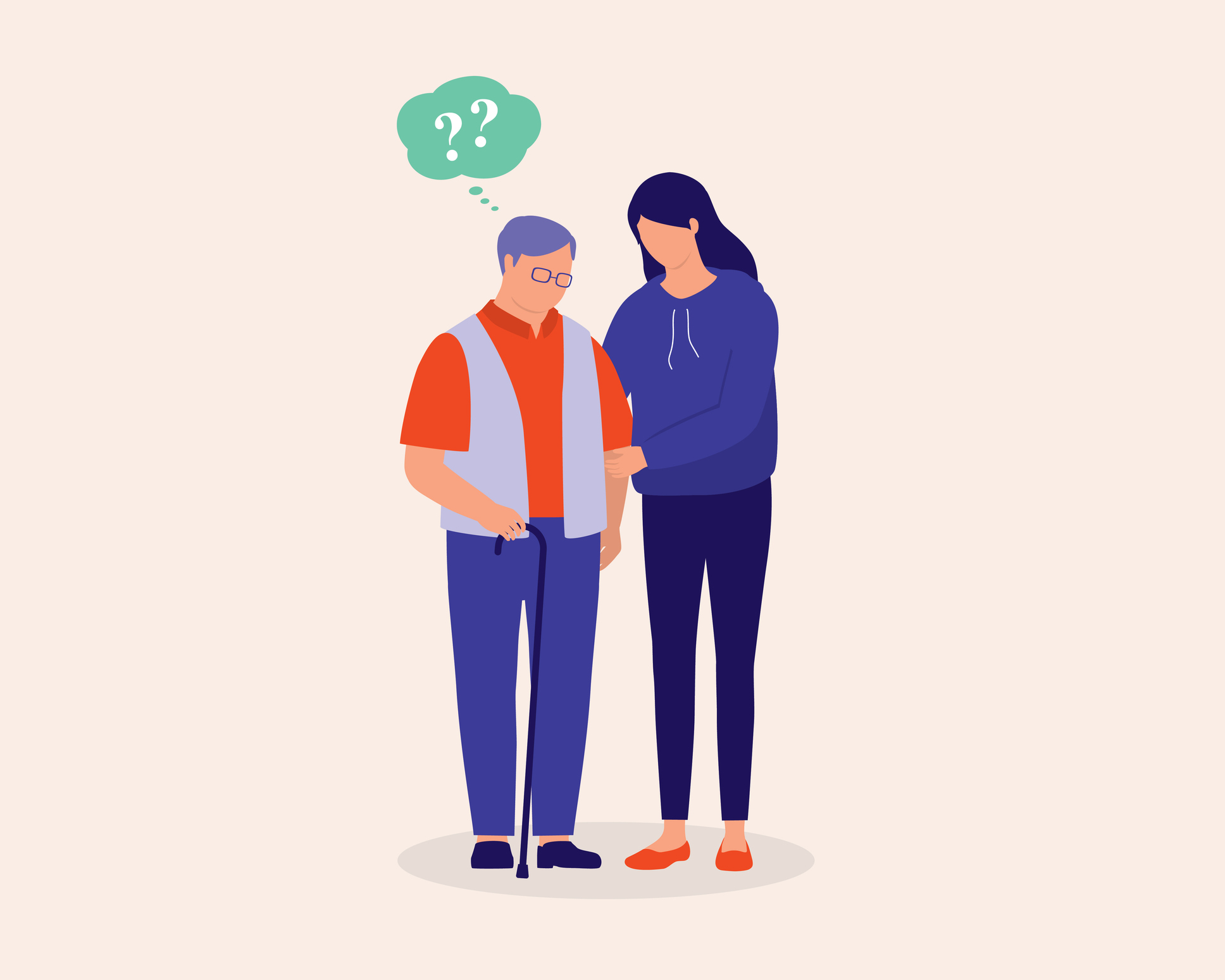 It was a Saturday and, no matter that my parents had just travelled 300 miles to see me, my husband and our three children, my dad was insistent.

He was making a lasagne.

He’d made one every weekend for as long as I remembered – it was his signature dish.

After failing in my attempts to persuade him that a takeaway might be an easier option, I eventually started rummaging through the fridge to see what ingredients I already had in.

‘Looks like we have most of it,’ I declared eventually. ‘We just need the mince, lasagne sheets and cheese.’

‘Slow down, slow down,’ Dad said, rifling through his pocket. ‘Let me write it down.’ I laughed at first. ‘Of course you won’t need to write it down, it’s just three things.’

But Dad was already pulling out a well-thumbed notebook. ‘Tell me that again,’ he instructed and carefully wrote the three ingredients down, before heading out to the Tesco Extra, not two minutes away.

‘What was all that about?’ I asked Mum, my heart beating that bit more quickly.

‘He just has to write these things down now,’ she said, avoiding my eyes. ‘He is getting on a bit – we both are.’

It might sound like such a minor exchange to anyone who didn’t know my dad but that moment confirmed all the suspicions that had been building for months now.

You see, my dad had always been so… on the ball. He did a degree when me and my sister were younger, worked full-time and looked after us on a weekend when my mum worked as a hairdresser in a salon.

It wasn’t until we went to secondary school, though, that I realised just how good his memory was. He remembered all of the French he’d learnt in school, talked to me about the books I was studying – he could even untangle maths problems.

And that wasn’t the only way he showed his dedication to us. When my friends and I started going out clubbing, he’d be outside of the pizza shop, fending off the other drunkards who thought he was a real taxi, not just our personal one.

Any problems, we all knew to call him. When my two best friends and I travelled around South America, we joked on the plane, ‘If we get lost, it’s going to take your dad a bit longer to pick us up from over here.’

In fact, when I was struck down with a stomach infection and missed my flight home, my best friend actually called him. ‘You don’t have to go over there,’ she insisted firmly. ‘She’ll be fine.’

And when me and my sister started having our children, he loved them as much as he loved us.

When I realised he couldn’t remember three ingredients to a dish he’d cooked countless times, I knew it was Dad I needed to talk to

So when Dad started calling my little girl, ‘he’, I was puzzled more than anything. No matter how many times I corrected him, he just couldn’t get it right.

Then, there were other things. ‘Where’s Mum?’ I’d ask when I called. ‘She’s out talking to… you know, the neighbour,’ he’d say vaguely. The neighbour? We’d lived in the same house – next door to the same lady – for over three decades.

Then there was the time he was going to redecorate my sister’s bedroom – and started working on the wrong room.

He bought cabbage, rather than the requested cauliflower cheese and questioned a taxi driver over the change even though it was perfect, down to the penny.

Me and my sister discussed it over and over. Talking ourselves into and out of worse-case scenarios.

But when I realised he couldn’t remember three ingredients to a dish he’d cooked countless times, I knew it was Dad I needed to talk to.

So when I found myself alone in the living room with him, I took my chance. ‘Dad, we’re worried about you,’ I blurted. ‘Will you go to the doctor? For me?’ It felt like a betrayal, even just asking him, and I burst out crying with the effort.

His GP agreed to go through the test with him and he aced it – until, just before he left and she asked him what his name was. And he couldn’t remember.

She referred him on for scans and we finally got our answer. Dad had Alzheimer’s.

No matter how worried I’d been, nothing could have prepared me for hearing that news.

Other, older, members of our family had suffered from the same condition and I’d witnessed first-hand just how destructive and cruel it could be, taking away the different pieces of your loved one, all the pieces that made them the person you loved, until you were just left with a shell.

I cried for two days straight and even now, 18 months on, it can still bring me to tears.

Dad is on medication, which will hopefully slow down the disease in its tracks, keeping him with us for longer.

He still struggles with his words and carries his notebook around with him everywhere.

Whenever we gather for our Saturday night meal, still cooked by him, albeit with the help of a cookbook now, it’s clearly overwhelming for him. The numerous conversations, the children hurtling around… But he also, equally clearly, loves it.

A private and proud man, he hasn’t told anyone out of the immediate family of his diagnosis, which is why I’m writing this anonymously. He wants to carry on life as normally as possible, for as long as possible.

I’ve never seen him get upset – we’re not at the stage of joking about it, but he’ll often laugh when he can’t find the right word and brush it off.

But Mum says he’s broken down twice in front of her.

I’ve always hated the phrase, ‘taking it day by day’ – life is for making plans, anticipation, getting excited for things. But that’s exactly what we’re doing now. And every extra day we have with him, that he still recognises us, we appreciate.

He still looks out for, and after, me and my sister and our families. The other day, he informed me he’d arranged for someone to cut back the tree in our garden, before heading out there himself to mend our fence. He feels the tree is too tall, apparently.

I have no strong feelings on the height but I do know how important it is for Dad to do that for us, so I’m more than happy for it to be cut down, if necessary.

And when the time comes, we’ll take as good care of him as he has of us.