A widespread change in political views could be to blame for people increasingly turning their backs on vaccines, researchers have suggested.

More people are being found to have anti-vaccine views in countries where populist politics are growing in popularity.

Populism – practised by US president Donald Trump and UKIP – is politics claiming to be based around the concerns of average people and not ‘elite’ wealthier people, who traditionally have more power.

Low vaccination rates are believed to have contributed to measles outbreaks across Europe and the US this year, and the movement is growing larger online.

Anti-vaxxers fear jabs are ineffective or may make their children ill – neither of which have been proven to be true. 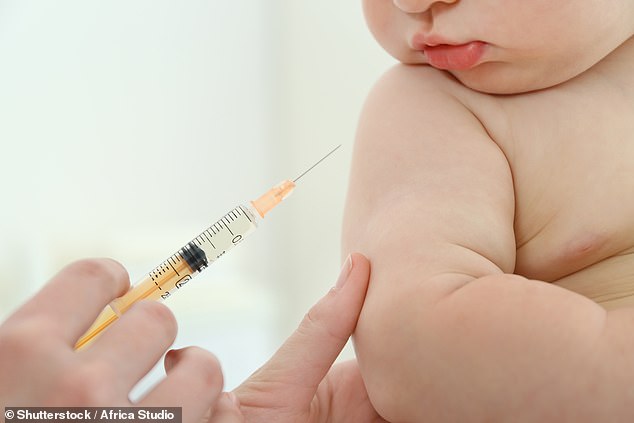 Scientists at Queen Mary University in London looked at countries in western and northern Europe for their research.

They compared the numbers of people who voted for populist parties in 2014 European elections with a survey of how many people do not believe vaccines work.

Countries where populist voting was higher, they found, also had higher rates of people sceptical about immunisation, The Guardian reports.

‘We talk about populism and what happens in politics,’ said Dr Jonathan Kennedy, the study author.

‘But when you look at what is behind the rise of populism, it is the broad trend of lack of trust in elites and experts.

‘That impacts on academia and public health and issues like climate change and vaccine scepticism.’

Italy, where a right-wing populist government was voted into power last year, has the highest level of anti-vaccine sentiment, the research showed.

And the country also suffered a spike in measles cases last year – alongside France and Greece, which both also have high numbers of populist voters.

Measles – which can be fatal for children – hit its highest levels in 10 years in Europe last year.

Some 82,596 people caught the infection and 72 died, according to the World Health Organisation. 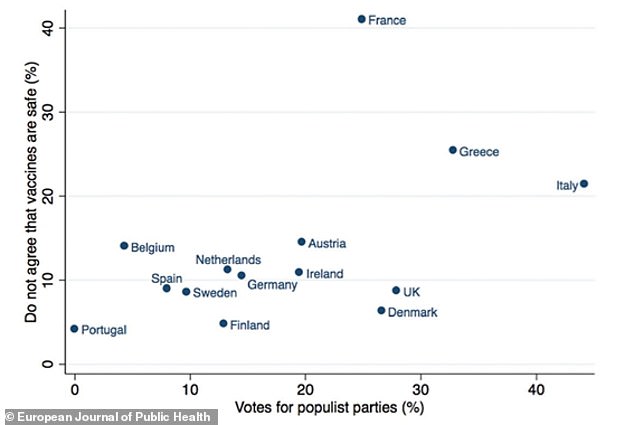 Researchers found a link between the proportion of people voting for populist parties and the proportion who don’t believe vaccines are safe – France, where more than four in 10 people were sceptical about immunisation, also had around one in four voters as populists 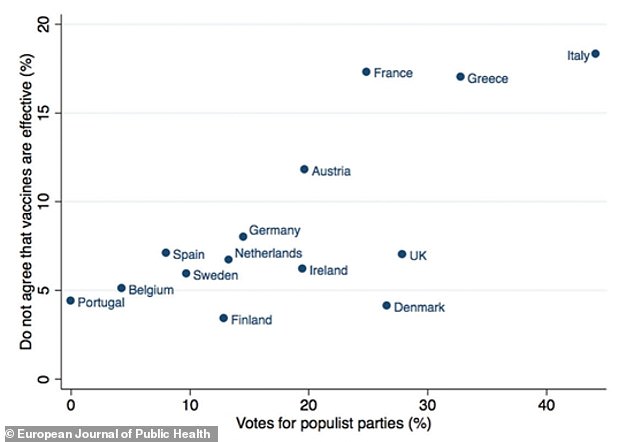 In the research, Italy, where people voted a populist party into government last year, also had the highest proportion of people who did not believe vaccines worked

Ukraine reported the highest number of cases in Europe last year, while more than 90 per cent of cases were in 10 countries, including France, Italy and Greece.

Public Health England revealed there were 913 measles diagnoses in England and Wales between January and October 2018.

While more children in Europe are being vaccinated against measles than ever before, progress has been ‘uneven’ between countries and individual countries have some patches where vaccine take-up is low, the WHO said.

Dr Kennedy and his colleagues suggest rising numbers of populist voters could provide countries with a warning of vaccination levels falling and pre-empt possible disease outbreaks.

He added: ‘The trouble is we do need to have some basic trust in experts to survive as a human society.

‘To prevent measles outbreaks, it is necessary to have 95 per cent of children vaccinated.’

The research was published in the European Journal of Public Health.

In 1995, gastroenterologist Andrew Wakefield published a study in The Lancet showing children who had been vaccinated against MMR were more likely to have bowel disease and autism.

He speculated that being injected with a ‘dead’ form of the measles virus via vaccination causes disruption to intestinal tissue, leading to both of the disorders.

After a 1998 paper further confirmed this finding, Wakefield said: ‘The risk of this particular syndrome [what Wakefield termed ‘autistic enterocolitis’] developing is related to the combined vaccine, the MMR, rather than the single vaccines.’

At the time, Wakefield had a patent for single measles, mumps and rubella vaccines, and was therefore accused of having a conflict of interest.

Nonetheless, MMR vaccination rates in the US and the UK plummeted, until, in 2004, the editor of The Lancet Dr Richard Horton described Wakefield’s research as ‘fundamentally flawed’, adding he was paid by a group pursuing lawsuits against vaccine manufacturers.

On January 6 2011, The British Medical Journal published a report showing that of the 12 children included in Wakefield’s 1995 study, at most two had autistic symptoms post vaccination, rather than the eight he claimed.

At least two of the children also had developmental delays before they were vaccinated, yet Wakefield’s paper claimed they were all ‘previously normal’.

Further findings revealed none of the children had autism, non-specific colitis or symptoms within days of receiving the MMR vaccine, yet the study claimed six of the participants suffered all three.