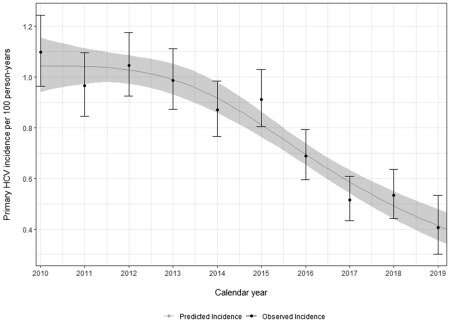 The importance of access to highly effective direct acting antiviral (DAA) treatments to help eliminate hepatitis C (HCV) among people living with HIV (PLHIV) has been demonstrated in new research led by Burnet Institute, published in the journal eClinicalMedicine.

Subsidized in Australia through the Pharmaceutical Benefits Scheme, DAAs that cure up to 95% of patients have been available since 2013, prompting the World Health Organization to set ambitious targets to eliminate HCV as a public health threat.

The collaborative multinational longitudinal study is the first formal evaluation of the impact of DAAs on HCV in more than 45,000 PLHIV and 250,000 person-years of follow-up in five countries, including Australia, between 2010 and 2019.

It found that broad DAA access was associated with an approximate 50% reduction in HCV incidence, and that DAAs have a “treatment as prevention” effect on primary HCV incidence.

Treatment as prevention entails treating as many individuals as possible for their hepatitis C infection to prevent further transmission and reduce the number of new infections in the population.

“Our findings suggest that limited access to direct-acting antivirals is unlikely to substantially reduce hepatitis C incidence where HCV transmission is ongoing, even at low levels,” Dr. van Santen said.

“Broad access to direct acting antivirals, on the other hand, has an immediate and lasting ‘treatment as prevention’ effect on hepatitis C incidence among people living with HIV in the first years of broad DAA availability.”

Co-lead author, Burnet Senior Research Officer, Dr. Rachel Sacks-Davis said the new study is significant for filling a gap in empirical data on progress towards elimination and the role of DAAs in reducing the incidence of hepatitis C.

“Continued monitoring is warranted, however, because of the impact of the COVID-19 pandemic on incidence trends, and whether DAAs will continue to drive incidence reductions after 2019 is largely unknown,” Dr. Sacks-Davis said.

While modeling studies suggest global HCV elimination targets for 2030 are unlikely to be met, the new study shows that countries in the International Collaboration on Hepatitis C Elimination in HIV Cohorts—Australia, France, the Netherlands, Spain and Switzerland—are on track to meet WHO’s target to reduce the incidence of hepatitis C by 80% by 2030 compared to 2015 among people with HIV, based on surpassing the 30% incidence reduction progress target set by WHO in 2019.

Around 58 million people are living with the hepatitis C virus globally, with an estimated 290,000 annual deaths.