The NHS is preparing to face the ‘worst winter it has ever endured’ with more than a million patients expected to wait more than four hours in A&E over the cold season.

Almost 350,000 patients could also end up stranded on trolleys in corridors as they wait for treatment, the British Medical Association (BMA) has warned.

The union said harsh weather conditions, the potential of a severe flu outbreak and the uncertainty of Brexit could cripple the health service this winter.

Experts say at least another 10,000 beds are needed to give hospitals in England and Wales a chance over the coming months.

The BMA’s warning comes after recent years have seen staff overloaded by people wanting hospital treatment during the cold spell. 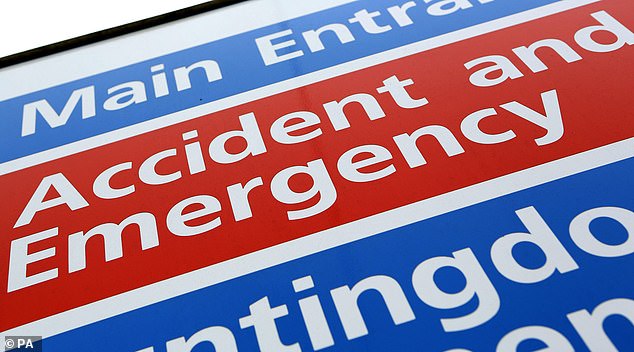 BMA chairman Dr Chaand Nagpaul said: ‘Enough is enough. Right across the health service, trusts and GP practices will be bracing themselves for what looks set to be the worst winter the NHS has ever endured.

‘Patients should not fear needing hospital care or being able to see their GP, nor should they have to accept that they may spend hours on a trolley in an emergency department waiting to be treated.’

He made the comments as the association publishes its election manifesto to lay out demands for the next Government to address.

The warning comes as part of the BMA’s worst-case scenario, which drew on  previous NHS data.

Interviews for the union’s Doctor magazine saw one medic describe how patients have suffered cardiac arrests in corridors while they waited for treatment.

The unnamed Midlands emergency medicine consultant said the summer had been ‘absolutely brutal’.

They added: ‘It’s really corrosive for staff because they are coming into work with patients lining the corridor.

‘We have been putting patients onto bits of corridor we have never used before – we are actually expanding into new areas.

‘There have been cardiac arrests on the corridor in a number of places. We are completely under the cosh and I don’t think there’s an emergency department in England or Wales that thinks that patient care isn’t going to suffer over winter.’

Another south-west specialty trainee in emergency medicine said conditions were ‘not safe’.

The NHS is on a collision course as it heads into winter with waiting lists for routine operations at an all-time high, experts have warned.

A damning report showed more than 4.41million patients were stuck on waiting lists in England in August – up by 250,000 from last year.

And 662,053 people have waited more than 18 weeks for routine treatments, such as joint replacements – the highest since records began.

Health leaders condemned the figures and said they show the NHS could face its worst winter ever with Brexit, harsh weather conditions and flu on the horizon.

NHS bosses said trusts up and down the country are working ‘incredibly hard’ to prepare for the winter and make sure patients are kept safe.

But the Royal College of Nursing fears more and more patients are going to be treated in corridors as pressure gets piled on the health service.

And the Royal College of Surgeons warned the upcoming winter pressure, Brexit and the NHS pension crisis will create a ‘perfect storm’ for hospitals this winter.

Experts called for ‘swift and far-reaching’ Government action to get the NHS braced for winter.

The comments came after Nottingham University Hospitals Trust (NUHT) declared a ‘critical incident’ this week due to pressures on its emergency services.

He added: ‘It is notable that even the chief executive of NHS England, Simon Stevens, has recently acknowledged that we need to go into winter with more hospital beds than last year.

‘The problem, of course, is that trusts don’t have the funding or staff to do that, so what is required is for the Government to acknowledge the scale of the problem and to fund these additional beds and staff before it’s too late.’

The BMA has launched its manifesto for health ahead of the General Election, calling for health spending to be increased by at least 4.1 per cent each year.

It has also demanded the current pensions system – which is seeing senior doctors reduce their hours to avoid large tax bills – be scrapped.

The union wants the public to have the final say on a Brexit deal and for safe staffing levels to have a legal footing.

Niall Dickson, chief executive of NHS Confederation, said: ‘As the NHS hurtles towards another monumentally busy winter period, we are facing a ticking timebomb where vital shifts might not be filled because of the ongoing pensions crisis.

‘We welcome the Department of Health and Social Care’s commitment to introduce changes to the NHS pensions scheme for senior doctors but we cannot afford to wait until April for these to be rolled out given that vacancies are high, staff are understandably refusing to take on extra shifts and demand for services is growing.’

Shadow health secretary Jonathan Ashworth said: ‘Doctors on the frontline are confirming what patients are telling us every day – the NHS is in crisis under the Tories and you can’t trust anything they say.

‘Already, waiting lists are at 4.4 million and, in the last year, shamefully over 600,000 patients languished on trolleys in corridors not able to get a bed after Tory bed cuts of over 15,000.

‘Ministers should apologise to every patient for this coming winter of misery.’ 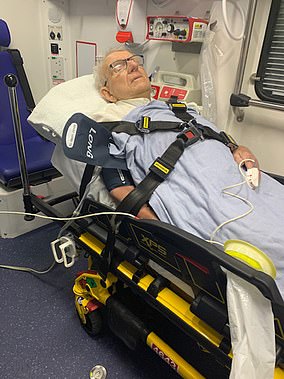 Donald Driver in an ambulance in the way to hospital

A pensioner died after spending six hours in a queue of trolleys at A&E.

Donald Driver, 84, was seen by doctors after sliding off a trolley and vomiting at 12.30am – six hours after arriving in an ambulance at the ‘rammed’ unit with his daughter.

Emma Driver said nurses at Coventry’s University Hospital ‘would not listen’ as he lay in a queue of up to 40 trolleys complaining of severe stomach pain on October 13.

He had symptoms similar to a stomach ulcer last year. ‘It seemed to be a case of, “We know best”,’ Miss Driver, 31, said yesterday. The former nurse, from Tile Hill, Coventry, added: ‘Nobody looked at him, no pain relief was given. It was horrific.’

After the grandfather and former engineer collapsed, ‘the nurses helped get him back on the trolley but when I saw his face, I knew he was gone,’ Miss Driver said.

The worrying waiting times figures come as the country braces for a severe flu outbreak over winter.

Almost 293,000 flu cases have been recorded in Australia so far in 2019, with the outbreak beginning to take hold in March.

Australia’s flu season usually lasts begins in May and lasts until October, with their outbreaks normally peaking in August.

In comparison, there were less than 230,000 confirmed reports of influenza by the same time point – until the end of September – in 2017.

That year’s outbreak was the same that saw the rise of ‘Aussie flu’, after the country was rocked by a strain that eventually made it to the UK.

Most of the Australian cases confirmed by laboratory tests earlier this summer – 57 per cent – were shown to be an unknown type of influenza A.

Leading experts warned earlier in June that it is likely the UK will have an equally bad winter, saying the outbreak is ‘very scary’.

The same strains of the virus will circulate north in time for the British flu season, which typically begins in November and lasts until March.

Saffron Cordery, deputy chief executive at NHS Providers, said at the time: ‘The spike in flu we are seeing in Australia could be a worrying signal of what is to come for health and care services this winter.

‘Planning for vaccinations is based on what happens in the southern hemisphere.’ Australia’s flu season peaks in July and August.