When you want to stop drinking or at least cut-down, knowing how to sit out a craving makes a difference.

“A craving lasts for about 15 minutes. It’s like an ocean wave that gets bigger and bigger but then diminishes. If you can ride it out, you’ll feel stronger on the other side,” says Melise Ammit, a nurse with 11 years’ experience in addiction medicine. She’s one of a small but growing number of sober coaches in Australia, and specialises in helping women quit alcohol. 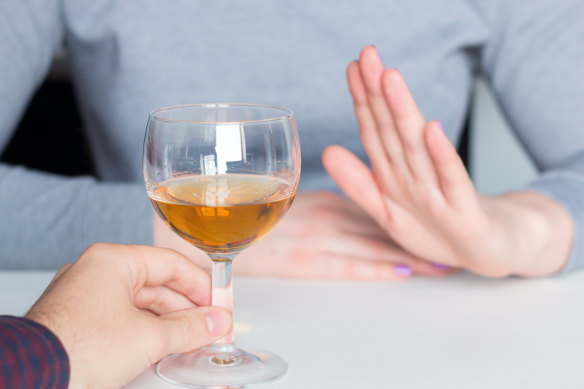 “I’m like a personal trainer for recovery – coaching helps us improve in so many aspects of our lives, and changing behaviour with alcohol is no different. ”

She’s also part of a new wave of options to tackle unhealthy drinking. Once there wasn’t much choice – mainly Alcoholics Anonymous or a drug and alcohol treatment service in the public health system. Both change lives for the better but aren’t the right fit for everyone. Treatment services may have waiting lists, and accessing one can mean walking into a building bearing a sign saying ‘Drug and Alcohol Clinic’.

Then there’s that word ‘alcoholic’, so loaded with stigma it makes many drinkers run a mile if it doesn’t define where their drinking is at.

“There’s a spectrum of drinking behaviour that I call the space between AA and the pub. I knew I wasn’t an extreme drinker but I also knew alcohol was having an impact on my life,” says Victoria Vanstone who quit drinking in 2018. “It’s about finding where you sit on that spectrum of grey area drinking and then finding others who are like you.”

Vanstone began podcasting about staying sober in 2021 with SoberAwkward, a fresh take on over-drinking that’s like a warm hug with a dose of humour – and no judgement. SoberAwkward’s podcasts now have 60,000 downloads each month.

Now she’s launched Cuppa, a free social network for the sober and sober curious to share stories, connect with others, and find help if you need to quit alcohol. With her, is 31-year-old Hamish Adams who’s inviting others to join him on his 12- month sobriety challenge – not because he’s a problem drinker but, as a new dad, he knows that hangovers and little kids don’t mix.

“We’re saying it’s okay to question your alcohol intake. It’s an approach that widens the funnel and brings more people in,” Vanstone says. But her lighter touch with problem drinking isn’t always what the media wants to hear.

“When I’m interviewed, the first thing they ask is what was it like when I reached ‘rock bottom’. They want me to say something like I’d been passed out and vomiting, while my baby crawled over me. But you don’t have to reach rock bottom before you decide you want to stop drinking. ”

“They want me to say something like I’d been passed out and vomiting, while my baby crawled over me. But you don’t have to reach rock bottom before you decide you want to stop drinking.”

Then there’s Untoxicated, which makes it easier to socialise without booze via its meet-up groups in Sydney, Melbourne and Brisbane. Its 8,000 members are often former ‘grey area’ drinkers or those who’ve never drunk alcohol at all, says the organisation’s CEO, Andrew Addie.

“They’re people who want to socialise without being scrutinised for not drinking. People want to be healthy and there’s a movement away from booze. Non-alcoholic drinks are going through the roof and even some alcohol manufacturers are pivoting to produce non-alcoholic drinks too.”

But before SobreAwkward, Cuppa and Untoxicated, came other trailblazers. Hello Sunday Morning has online support and resources, including the Daybreak App for anyone trying to reset their drinking habits. SMART Recovery has online meetings to help change habits with alcohol, food and gambling. It uses Cognitive Behaviour Therapy techniques to help people cope with cravings and stay motivated.

“It’s fantastic to have more options – people want to be able to choose the approach that works for them,” says Professor Dan Lubman, Executive Clinical Director of Turning Point, Australia’s leading treatment and research centre for people affected by alcohol, drugs and gambling.

“Two things have helped accelerate how we think about supporting people who want help for their drinking. COVID was one because it opened up the conversation around alcohol.

“We’re also getting better at talking about other issues that were once highly stigmatised, like mental health, family violence and being LGBTQI+. We’re more sympathetic and open to more compassionate approaches.”

The stigma that clings to problem drinking can stop people getting help, says Lubman, who’s involved with Rethink Addiction, the national campaign aiming to change how we think about addiction.

“It’s the most stigmatised health condition there is. The common media stereotype of derelict drinkers and people in laneways with needles in their arms isn’t the reality of addiction in Australia, and Rethink Addiction is helping tell the stories of what real people affected by addiction look like and experience. It’s humanising the issue,” he says.

“Another barrier to treatment is the myth that drinking problems can’t be treated, but we know that treatment works, and we have lots of options available.

Lubman says that unlike the messaging from the alcohol industry spruiking the joys of drinking, there’s little in the way of promoting treatment for drug and alcohol.

“But I’m hopeful we can now have an honest conversation about alcohol – we can’t keep burying our heads in the sand.”

For free, confidential advice about alcohol and other drugs, you can also call the National Alcohol and Other Drug Hotline on 1800 250 015.

Make the most of your health, relationships, fitness and nutrition with our Live Well newsletter. Get it in your inbox every Monday.